Why the tragedy of “Belarusian Auschwitz” is only now emerging from the shadows?

Prior to the official opening of the Trostenets memorial of the former concentration camp removed the “wrong” signs and crosses. Destroyed signs stated: in Trostenets mass extermination of people not only German Nazis but also the Soviet Stalinists. 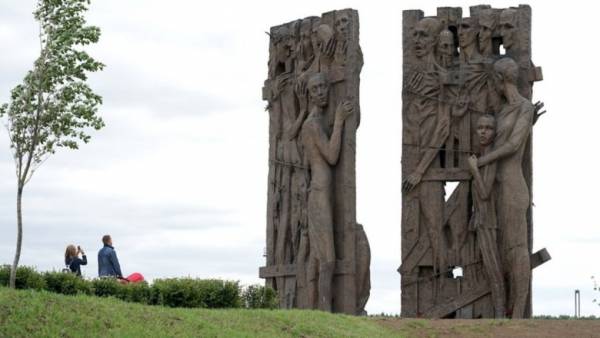 Some historians call Trostenets “Belarusian Auschwitz”, arguing that the number created by the Nazis of victims of Trostenets fourth after Auschwitz, Majdanek and Treblinka.

About the death toll, however, to this day argue that the Soviet state Commission, which revealed in the tract blagovschina 34 firing of the pit in the summer of 1944, shortly after the liberation of Minsk, found in graves only ashes and bones; the number of the buried was calculated according to the volume of the ditches, seven people per cubic meter; get 150 thousand.

Primitive cremation oven and the remains of about 50 thousand people also found on the other side of the village of Maly Trostenets, in the tract Shashkovka; the charred remains of 6,500 victims found in a burned-down farm shed.

Researchers in recent years, using the specified calculation method, say about 60 thousand were killed by the Nazis in the tract blagovschina.

But the question is not only in the calculations.

In Belarus, all the post-war years living under the slogan “Nobody is forgotten, nothing is forgotten”, the tragedy of Trostenets was only now emerging from a long shadow.

Under a city dump?

“I insist Trostenets should become a symbol of the tragedy of the two regimes — the Soviet repression and Nazi occupation period”, — said the candidate of historical Sciences, researcher Igor Kuznetsov.

In the tract blagovschina under the city dump is located, according to my estimates, remains about 15 thousand people who were shot in the Stalin era, from the mid 30-ies until 1941.Igor Kuznetsovand of historical Sciences, researcher

“On the right side of the current memorial “Road of Death” — the place of execution of prisoners of the Minsk prison in the night from 25 to 26 June 1941. It was the first stage of the so-called evacuation of prisoners during the German offensive; the second stage was shot in two days on the outskirts of Cherven” — says Kuznetsov.

A few years ago, activists set up near the dump and the place of execution of prisoners in Trostenets wooden crosses with signs informing about the Stalinist repressions.

A few days before the official opening ceremony of the memorial Trostenets (29 June the ceremony was attended by the presidents of Belarus, Austria, Germany, representative of the delegation of Poland, Czech Republic, Israel, foreign visitors) the “wrong” crosses demolished.

“When was the question of the construction of the memorial in Trostenets, I was invited by my German colleagues and asked to stop the presentation and publication of the Stalin-era executions in Trostenets. Like, you know how painful the Belarusian authorities treat the problem of Stalinist repression. Because of this, the memorial may not occur,” says Kuznetsov.

But, according to researchers, the Soviet state Commission in the summer of 1944, first found the bodies of the victims of Stalinist repression, and then 50-100 meters away from these collective graves with the remains of ditches and ash.

“In 1956 on the site of Stalin’s graves in Trostenets, which was already declared a protected zone, poured the landfill this landfill operated until 2010. Who will tell, what’s underneath?”, — says Kuznetsov.

I am convinced that it is because of Stalin’s death ditches, which could be detected by international experts, the Soviet Union did not make the fact of fascist crimes Trostenets war at the Nuremberg trials.Igor Kuznetsovand of historical Sciences, researcher

Other researchers argue strict legal terms to Nuremberg Trostenets do not fit the category of Nazi camps. Prisoners here do not contain and do not stay long — was brought here to destroy.

“A German researcher Paul Kohl, one of the first applied to the problem of Trostenets, in an interview to mid-2000s, saying, in Belarus never touches the memory of Trostenets, because it is concerned with the facts of the collaboration of the local population in the years of the Second world war”, Belarusian historian Kuzma Kozak, now the referent of a Historical workshop Minsk international educational center named after Johannes Rau remembers about those years tried to find in the Maly Trostenets people who survived the Great Patriotic war.

“At the Maly Trostenets in the fence, where there is a monument burned on June 29-30, 1944, grazing sheep… students interviewed people in the village, and found that almost all the inhabitants settled in the Maly Trostenets after the war,” says Kuzma Kozak.

By the time of the liberation of Belarus in 1944 at the Maly Trostenets there was a so-called defensive village. Such villages the German occupation authorities began to create on the territory of Belarus in 1943, when the Nazis was complicated by the situation on the fronts and forces to maintain the “German order” was not enough.

Defense of the village had to confront the “bandits and partisans” men for these purposes were allowed to have weapons.