The Moscow city court has released the top Manager of “RUSNANO” Andrey Gor. 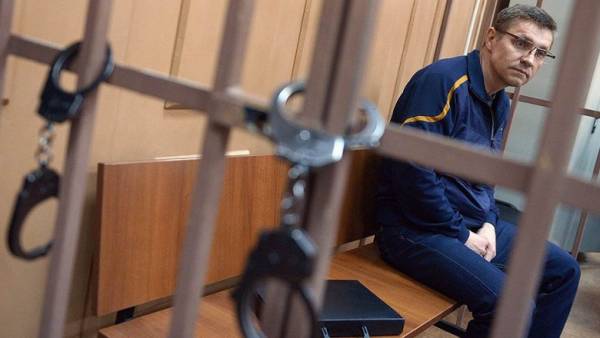 The Moscow city court today released from custody managing Director on investment activity of “Rosnano” Andrey Gorky, accused the Investigative Committee of Russia (TFR) in the theft of 198.5 million RUB Top Manager held in jail for a year for abuse of power, the damage from which, according to investigators, amounted to 700 million rubles. While the Corporation itself a victim, not guilty, and the Prosecutor’s office argued that the grounds for arrest of the businessman was not.

Having considered the appeal and appellate representation of the state office of public Prosecutor, the Moscow city court, quashed a month ago, the Basmanny district court decision to arrest Andrei Gor, ruling for his immediate release from custody.

Andrey Gorkov was sent to jail for committing a crime under part 4 St. 159 criminal code (fraud in especially large size). According to investigators, he and unidentified executives “Rosnano” in 2010-2011 concluded with its partners, the agreements on investments in OOO “ESTO-Vacuum”, which was supposed to start production of automated vacuum units for ion-plasma coating and etching of micro – and nanostructures.

The total project budget was planned in the amount of RUB 1 billion, the money by 2016, OOO had to produce 60 units per year. However, the investment of 198 million RUB from outside “Rosnano” has not justified itself. In 2013, the business plan acknowledged a failure as a revenue in the amount of RUB 19 million he did not match.

The new case against the top Manager of “RUSNANO” was initiated the day before it expired limit, 12-month, period of detention on the first charge, abuse of office (part 2 of article 201 of the criminal code). The investigators believed that placing $ 700 million. owned by the Bank “Smolensk”, which was soon declared bankrupt, Mr. Gorkov has caused “Rosnano” the damage in especially large size.

Protection of Mr. Gor from the very beginning of the investigation, noted that he only acted as the executor of the decisions of the collegial bodies of RUSNANO. Thus, in particular, was at the financing of the project with vacuum installations.

The Prosecutor’s office, who spoke against the conclusion of Mr. Gor into custody and prolongation of his arrest, pointed out that both criminal cases against him are in production of the same investigator, who was supposed to combine both episodes, not investigate them separately.

In this case, Mr. Gorkov was not subject to re-arrest, as held in custody for a year.

In addition, celebrated for the protection of the businessman, while he was sitting on the first count, the investigative actions had taken place. Lawyers believe that in the TFR, without proof of the guilt of a top Manager, was counting on the fact that he, for a long time while imprisoned, he decides to plead guilty to go free. Recognition was not forthcoming, and the freedom Mr. Gorkovo provided justice.