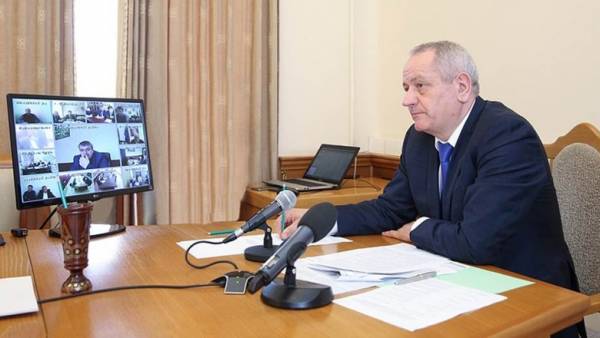 First Deputy Prime Minister of Dagestan Ramazan Aliyev on Wednesday was detained by the FSB, suspecting him of excess of powers of office. The KGB came for the official, when the acting head of Dagestan Vladimir Vasilyev announced his release from office. While President Aliyev is suspected minor offense, but given that he had previously held the positions of chief of the financial Supervisory authority and the head of the administration of the former head of the Republic Ramazan Abdulatipov, the investigation promises to be loud.

About the arrest of the first Deputy Prime Minister Ramazan Aliyev was announced during a selector meeting with heads of municipal areas and city districts, which Vladimir Vasilyev held in videoconference.

The conversation was about the problem of water supply in Buynaksk and the Buynaksk district. Mr. Vasiliev recalled that earlier, during the meeting of the security Council of the Republic, declared that the water of these territories will be allocated 400 million rubles.

“Today I made the decision to dismiss the first Deputy Prime Minister Ramazan Aliyev, who had been entrusted with this work”, — said the acting head of the Republic.

He reported to me and the Prime Minister that by the end of the first quarter we collected taxes in the amount of 1 billion 30 million, on this basis we all designed. It is widely discussed, specially made for a meeting of the security Council, all agreed. But this amount, as it turned out, not collected. Collected only 300 million.Vladimir Vasilievsly of the head of Dagestan

Then, expressing regret, Vladimir Vasilyev said that the Cabinet Ramazan Aliyev is searched. When was promulgated the decree of the acting head of Dagestan to dismiss the official, the search was conducted not only in the administration building, but Mr. Aliyev, who has held the post of first Vice-Premier of the government of the Republic from February 2016.

As it turned out unofficial sources, a criminal case was initiated by the investigators of the FSB under article 286 of the criminal code — exceeding official powers. After the interrogation, the KGB have detained a former official.

According to a source “” in law enforcement bodies, the consequence has data on several episodes of exceeding Mr. Aliyev’s official authority.

One of them is that by order of the official in the government garage was serviced by his private SUV.

Note that 61-year-old Ramazan Aliyev, a native of Tlyaratinsky district of Dagestan (from the same generation, the former head of the Republic Ramazan Abdulatipov). Mr. Aliyev from 1985 to 2013, he served in the Ministry of interior, tax police, Federal drug control service, and on doing mostly investigative work. As head of the Republic, Mr. Abdulatipov invited him to head the financial Supervisory authority of the President of Dagestan. Since September 2013, Mr. Aliyev headed the presidential administration and the government of the Republic.

Therefore, it is possible that it could be of interest to the investigative authorities as a witness possible abuse by a more senior Republican officials.

In this regard, it is worth Recalling that the former head of the Republic Abdulatipov already had questions in the investigation of fraud committed, according to the TFR, the ex-Prime Minister of Dagestan Abdusamad by Gamidov, his deputies Shamil Isaev and Rudina Yusufov, a former Minister of education Shahbazim Shakhov, who are under arrest in Moscow. In turn, the lawyer Eduard Isetsky representing the interests of Mr. Hamidov, told “Kommersant” that in their case Ramazan Aliyev does not appear. Perhaps, he said, the investigation this time will be held in Dagestan.