“China is developing, and on our side as it was, and there the boondocks”

Valentina Matvienko lashed out at the authorities of Transbaikalia. 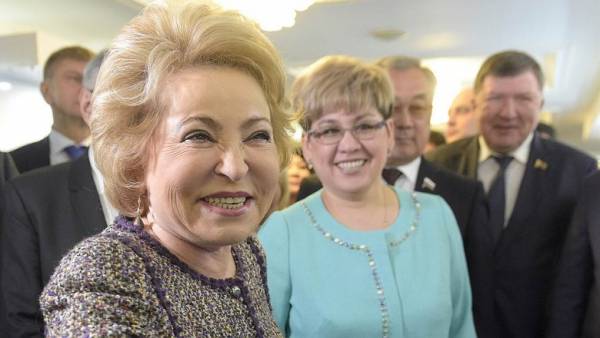 The speaker of the Federation Council (FC) Valentina Matvienko during a visit to the TRANS-Baikal region was called the regional center of Chita “running” and “unkempt”. According to her, the region has a huge area and many opportunities for development, but it is, in contrast to neighboring China, remains a “backwater”. The head of the region Natalia Zhdanova “very trying”, but she “inherited a heavy legacy”, I’m sure Mrs. Matvienko.

Valentina Matvienko, who arrived in Chita, said that “frankly disappointed this neglect, the negligence of the city.” According to the speaker, to walk around the city — “roads are bad”, “the lawns were not mown,” the borders “disappear”: “I’m not talking about heels”.

In front of the theater — “broken square” and in front of the Church — “broken white urodische fountain. It’s what, 90 years or something, shame on you.Valentina Matvienko Speaker of the Federation Council

Mrs. Matviyenko noted that “had not seen” such “untidy, uncomfortable city.” The responsibility for the appearance of the city, in her opinion, lies with the mayor (Anatoly Mikhalev.— “B”) and city Manager cheats (Oleg Kuznetsov.— “B”), which “is recognized, understood and will take action”.

In the region, according to the speaker of the Federation Council, and many other problems. Ongoing population decline, do not stay in the region the doctors.

“Call the doctor, and he has nowhere to live — a shack with a toilet in the street. That is not a special program to do (building houses for doctors.— “B”), with so much forest?” — has asked Valentine Matvienko.

Forest, she said, should be addressed separately: “Control who takes out the forest. If you establish control over timber is the Golden piggy Bank.”

The income of the region grew by only 6%, but this is not enough “when the possibility of Transbaikalia”. “Adopted a Federal law on cross-border cooperation — to work! — called on Mrs. Matviyenko.— On the other side of the border China growing, evolving outwards and upwards, and on our side as it was, and there the boondocks”. At the edge, according to the speaker, many opportunities for development.

Whether one, or two in France you have fits (the area of the region 431,5 sq km, France 640,7 thousand sq. km.—””)… Or simply France to join us?Valentine Matvienkova of the Federation Council

In her opinion, with the arrival of the Governor of the region Natalia. in September of 2016, “more order”, she and her team of “very trying”, but she “inherited a heavy legacy” (previously three years, the region was headed by Konstantin Ilkovsky).

The speaker of the Federation Council has often criticized the regional authorities while traveling on the subjects. A year and a half ago during a visit to Sakhalin Valentina Matvienko was indignant with the prices of food and transport infrastructure, and Yuzhno-Sakhalinsk called “shabby”.