Nazi Princess. As the daughter of Himmler worked in intelligence Germany and saved the SS

“On 24 may this year at the age of 88 years died, Gudrun Burwitz”. The news is not caused in the day have no interest in the European press, have attracted much attention a month later. 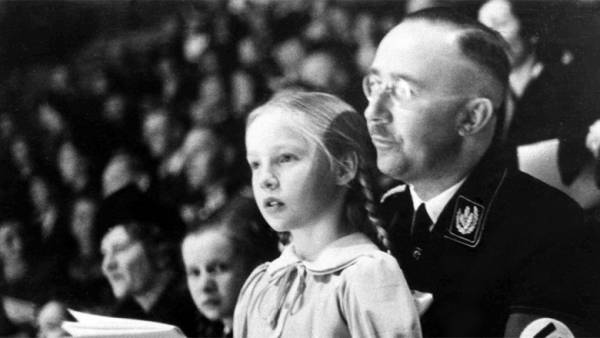 Not because it suddenly turned out that the maiden name of the deceased lady was Himmler and was the eldest child of Heinrich Himmler, who was the chief of the Gestapo and chief organizer of the Holocaust. The origin of Gudrun by this time the mystery was — sensationally uncovered secret was the information that Gudrun Himmler worked for nearly three years in Federal intelligence service of Germany (Bundesnachrichtendienst, BND). Details — in the material of the portal iz.ru.

The need for production

The daughter of a Nazi-clerk remained faithful to the father’s beliefs and never hid it — in the foreign intelligence service. The organization under the close supervision of the Federal Chancellery of Germany (Bundeskanzleramt) and the exclusive subjection to him.

Stain on the image of the highest authorities of the German state and the testimony of the double standards that can not be erased. European humanism, ward of Nazism, following the principle “if it is impossible, but there are production (national and state) need is you”.

All my adult (ie, post-war, because she was born in 1929) the life of Gudrun Himmler-Burwitz dedicated to “protecting the good name and memory of his father,” and helping people, who shared his views. Killed, tortured and sought to escape retribution. That is why it is called a “Nazi Princess”.

The assumption that Gudrun Burwitz connected with the secret services in Germany were put forward repeatedly, but it was all rumours “with high probability”, officially nobody has confirmed. None of the professionals in investigative journalism to dig up the documents, allowing to translate the assumption in the statement, also failed.

Only June 29, 2018, in just over a month after the death of the “Mother Teresa of Nazism” (another nickname of the eldest daughter of Himmler), the world press spread through short message, which cited the head of the Department of the history of the BND Hechelhammer Bodo (Bodo Hechelhammer): “the BND confirmed that Ms. Burwitz was a member of the BND for several years prior to 1963, under an assumed name.”

Reporters anonymous sources close to razvedrota, failed to establish that “a few years” is from 1961 to 1963 inclusive. Haven’t managed to get the answer to another question — how many years she was a freelance employee of the BND. Former intelligence and counterintelligence, as we know, does not happen…

Burwitz childhood perceived the concentration camps, the filling process which was managed by her father as “a curious place to visit”. She once wrote in his childhood diary: “Today we went to (camp) of Dachau. Saw many interesting things: saw the great gardens with plenty of pear trees. I have also seen the pictures painted by the prisoners. Amazing work! And then we had a little lunch. Very tasty”.

In the suicide of the father of Gudrun never believed, considering that he just could not swallow the capsule with a poison — so loved life.

My mom never got a death certificate. Not that he was disguised shave off my mustache and dressed in the uniform of an ordinary soldier, went to the allies. They simply killed, having received all the necessary information. A picture of him dead — no more than retouched photos in life.

After the death of Heinrich Himmler to his wife (at that time already a widow) Margaret together with 17-year-old daughter were taken into custody and went through several internment camps in Italy, France and Germany. In November 1946 they were released as not privy to the activities of the past life of reichsfuehrer SS.

Adulthood Gudrun beginning with the courses of fine arts and design at Bethel Christian orphanage, was really a haven for ex-Gestapo (the Nazis but without the prefix “ex”), which was corrected the new documents. The currency reform of 1948 left Gudrun without a scholarship, and she had to switch from teaching profession to the sublime to the more mundane — seamstress.

In 1952, Gudrun Himmler broke up with her mother and moved under Munich, where for several years she worked as a dressmaker, accountant, assistant Secretary. Father’s name bothered her to find prospective jobs, but did not stop to be adopted in 1961, the BND.