Archaeologists found the statue in the first pyramid of Ancient Egypt

MOSCOW, 2 Jun — RIA Novosti. Scientists discovered a bronze statue of Osiris in the step pyramid of Djoser, the oldest stone tomb “lords of two houses” which were built by the legendary Imhotep, according to Luxor Times. 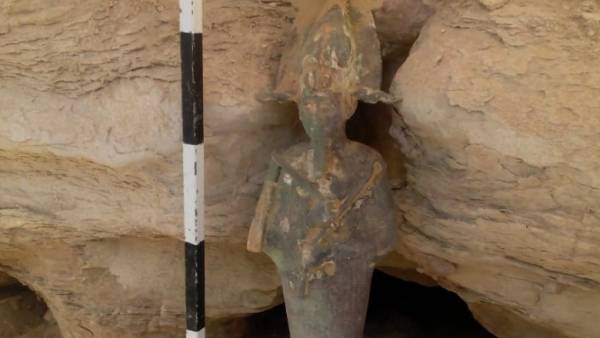 “The statue was found on the West slope of the pyramid, in the cracks between the stone blocks, when archaeologists began to clear sandy debris and remove debris. It depicts Osiris, God of the underworld and rebirth, holding in his left hand a pen and the right scepter,” said Mustafa Vaziri, head of the Supreme Council of Egypt on Affairs of antiquities.

Pyramid, a symbol of Ancient Egypt, was the pinnacle of Egyptian funerary architecture, held a long way from the primitive brick tombs, the mastabas, to the majestic pyramids of Cheops, the great temple of RA in Heliopolis and the mysterious Sphinx guarding Giza from the plunderers of tombs.

The first pyramid, as tell the Chronicles of Ancient Kingdoms, was built on the site of Saqqara, the first “valley of kings” in the vicinity of Memphis. Its “author” was Imhotep, architect, physician, scientist and Supreme adviser to the Pharaoh Djoser. This pyramid has a unique stepped shape which distinguishes it from all other tombs of “lords of two houses”.

The first serious excavations on the site of the pyramid began in 1926, and they continue to this day. Scientists slowly clear each “level” of the pyramid from the sand and debris and gradually rekonstruiruet them, simultaneously revealing new mysteries from the history of the Ancient Kingdom.

As suggested by archaeologists, they found the statue was not made in the time of Imhotep and Djoser, and in a much later historical periods. According to Egyptologists, it fell into a crack between the stones is no accident — put it there the priests, who wished in this way to perpetuate the link between Osiris, God of resurrection and the afterlife, and pyramid, the “gate” of the IARU, the ancient Egyptian Paradise.