Macron called for sanctions against countries with anti-immigrant position

The President of France Emmanuel macron called for financial sanctions against EU countries that unreasonably deny migrants the right to asylum. 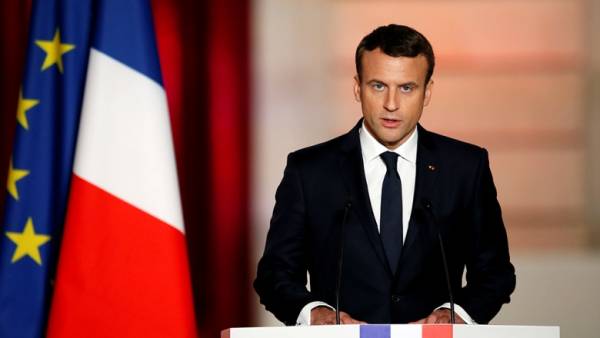 After talks with Prime Minister of Spain Pedro Sanchez, the politician said that “a positive attitude to the idea of creating an appropriate mechanism for such situations”, reports TASS.

A week earlier, the French leader criticized the European system of refugee reception and assistance to internally displaced persons. According to Macron, it is imperfect.

June 10 in Italy there was a scandal after the ship Aquarius with 629 migrants on Board were not allowed into ports of the country. Policy of the EU countries began to accuse each other in the wrong migration policy. In the end the displaced persons adopted Spain.

A difficult situation in Germany, where there was a split within the ruling political unification of the parties CSU/CDU due to migration policies of German Chancellor Angela Merkel, the resignation of which wants almost every second German. The Minister of internal Affairs and the head of the Christian social Union (CSU) Horst Seehofer gave her two weeks to solve the problem. He offers to refuse refugees to those received in the country where they first arrived. Merkel do not agree.

On 24 June in Brussels will host an informal meeting of EU leaders on the topic of migration. While Hungary, Poland, the Czech Republic and Slovakia who refuse to accept the refugees, the meeting was not invited.

According to the European statistical Agency Eurostat, the number of asylum seekers in the EU last year amounted to about 650 thousand people, compared to 1.2 million in 2015-2016. The main flow account for Italy, Greece and Spain. With the beginning of 2018, these countries have adopted a 40%, 35% and 25% respectively.