Raising the retirement age has downgraded the ratings of power

Sociologists have documented the negative attitude of Russians to the pension reform. 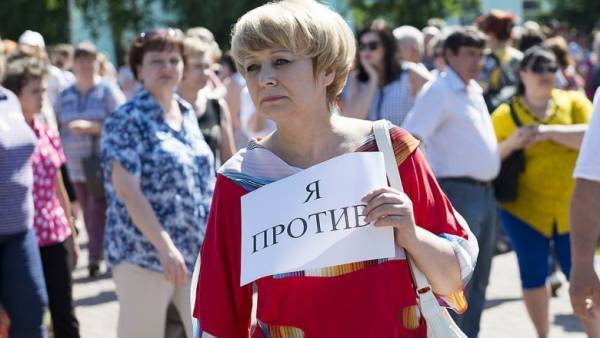 Announced by the government raising the retirement age had a negative impact on ratings of trust of Russians to all the institutions of government, including the President. It was recorded by leading sociological services of the country. Sociologists believe that further upgrades will depend on the ability of the government to convince the Russians that pension reform is appropriate.

The announced increase in the retirement age has been a disappointment to the Russians in all the institutions of power in a matter of days. About the upcoming reform — raising the age of retirement for women to 63 years for men to 65 — the government announced on 14 June. And already on June 17 polls during siposov recorded that the activities of the government approve of 44.7% of Russians, although a week earlier trust was 47.1 per cent. Approximately 3% decrease in the popularity of Prime Minister Dmitry Medvedev. His job approval is 38.5%, a week ago, it was 41.7 per cent. At the same time the Prime Minister rose rating: 44,7% do not approve of his activities.