MOSCOW, June 22. /TASS/. Russian President Vladimir Putin in the 77-th anniversary of attack of Nazi troops in the Soviet Union paid tribute to the fallen in the great Patriotic war of the Soviet soldiers, laying a wreath at the Eternal flame at the Tomb of the Unknown Soldier. 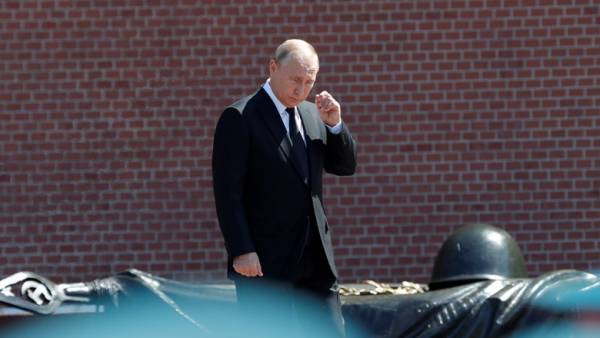 A traditional ceremony in the Alexander garden dedicated to celebrating the 22nd of June in the country the Day of memory and grief.

Soldiers of guard of honor mounted wreath with ribbon in Russian flag colors with a gold inscription “to the Unknown soldier from the President of the Russian Federation”. Putin has straightened the ribbon, and bowed his head in memory of the fallen during the great Patriotic war. Then flowers to the memorial laid other participants of the ceremony.

The event continued with a solemn March of troops representing the three forces — Land forces, Military space forces and the Navy. After the ceremony, Putin laid flowers at the alley of cities-heroes.

On 25 October 2007, Putin signed amendments to the law “About days of military glory and anniversaries of Russia”. The list of memorable dates was included new — June 22 — Day of memory and grief, the day of the great Patriotic war.