The Ministry called on the U.S. to stop distorting the facts and to shield the Kiev

MOSCOW, 20 Jun — RIA Novosti. The official representative of the foreign Ministry Maria Zakharova commented on the accusations of state Department intimidation of observers Special monitoring mission (SMM) of the OSCE in the Donbass. 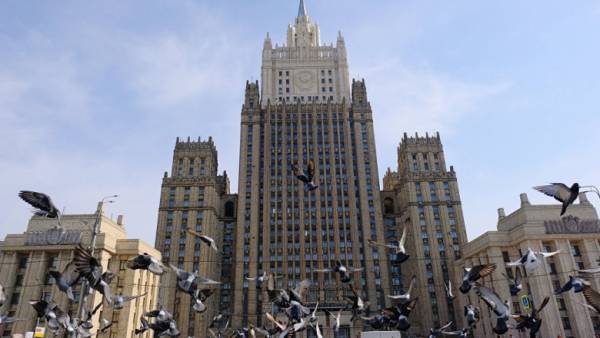 On Saturday the official representative of the American foreign Ministry Heather Nauert retweeted in your account the report of SMM, which said that on June 14, six observers heard warning shots in the village Pikuz 23 kilometers from Mariupol.

The document says that the mission was out of the car to examine the traces of the BMP, and then saw 50 meters away from two armed men, one of whom opened fire in the air.

According to CMM, it was about warning shots. Nauert, in turn, wrote that “subordinates the Russian military fired from a firearm to threaten staff of the OSCE monitoring mission in Eastern Ukraine”.

Such irresponsible statements are just another attempt to confuse public opinion, to present Russia as a party to the internal Ukrainian conflict, which it is not, and to whitewash Kiev’s actions, which sabotages the performance of its obligations under the Minsk agreements.Maria Zakharova the official representative of Russian foreign Ministry

She advised the Americans to “responsibly and professionally” approach to public statements and urged Washington to influence Kiev, that he began to implement the Minsk agreements. “Namely, to stop the shelling of Donbass, to lift the blockade of this region and grant him special constitutional status within the Ukrainian state,” — said the representative of the foreign Ministry.

In April 2014, the Ukrainian authorities began a military operation against the breakaway LC and the DNI, which declared independence after the coup in Kiev. According to the UN, victims of the conflict began more than 10 thousand people.

The settlement of the situation discussed in the meetings of the Minsk contact group, which from September 2014 adopted three documents regulating the steps to de-escalate. However, and then between the warring parties clashed.