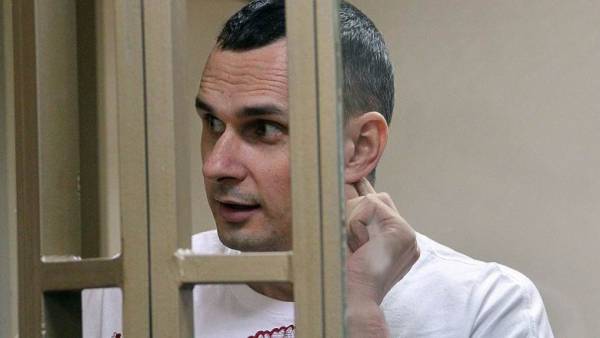 Appeal to the head of state published on the website of “Echo of Moscow”. “We don’t think his guilt is so great that she was given 20 years. He is sincere and honest in his beliefs — his indefinite hunger strike proves it,” say the authors.

According to cultural leaders, “we need to show mercy, to save human life.” “We need to soften the political climate in the country, to put up with neighbors. Excuse me Oleg Sentsov, we ask You,” the letter reads.

The press Secretary of the President Dmitry Peskov has declared to journalists that “public interest could not affect the court’s decision.” He said that for a pardon there is a special procedure, Oleg Sentsov needs to initiate it.

Previously, to pardon the Director asked the Russian writers. The corresponding appeal to the President was signed by over 60 members of the Russian branch of the world organization of writers, the Russian PEN center. Among them was Vladimir Voinovich and Liudmila Ulitskaya, Alexander Arkhangelsky and Denis Dragunsky. The signatories called upon to apply the law that allows Amnesty to convict without admitting guilt on his part.

Oleg Sentsov was arrested in 2014. He was accused of creating in the Crimea of the criminal community, which planned attacks and actions to destabilize the local government agencies. In August 2015, the Director was sentenced to 20 years. In mid-may of this year he announced an indefinite hunger strike. The Minister of culture Vladimir Medinsky called it a tragedy. On 14 June the European Parliament adopted a resolution demanding the release of Oleg Sentsov.