“The blood is black, light gray”. How to see the world colorblind

MOSCOW, 18 Jul — RIA Novosti, Anastasia Gadinsky. For these people, the blood and the grass the same color brown. They do not distinguish traffic lights, you can wear colored socks, and in conversations with strangers I try to avoid symbols colors. 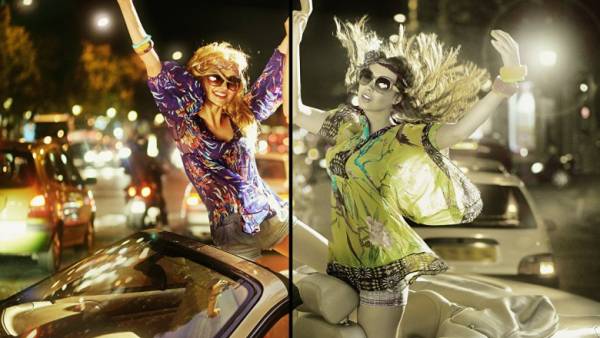 According to statistics, about eight percent of men are color — blind. Women less — only 0.4 percent. Paradoxically, among zitohromom there are photographers and even artists. For example, the Creator of the Olympic Teddy bear Viktor Chizhikov does not distinguish between shades of red and green.

The world is in shades of brown

Maxim Zmeyev — known photographer. But if Maxim is to ask what color, for example, a house in his picture, he is likely to go wrong. Kites — color-blind. It does not distinguish between shades of green and red, in certain lights, can confuse black with blue.

Imagine the blood I see in three different colors. For example, if it runs on the arm black. If smeared on the white sheet of paper brown. Bright red like most people — only if a vial of blood to look at the light.Maxim Slipology

Green lawn for Zmeeva — brown, and the traffic lights turns off-white. With approach of twilight the world of Maxim and all becomes grey, like an old film.

“The colors I was confused from early childhood, but finally it turned out that I was colorblind when I went to the first class. The teacher gave the assignment to draw a picture with a red pen, but I picked up green,” recalls the photographer.

Commission in the military has officially confirmed that he is colorblind.

The word from military service, this view is not anomaly free.

The photographer says that in everyday life, blindness does not prevent him: “Is that before to buy something from clothes, I always look at the website, what color it is. In addition, I find it difficult to collect mushrooms. I see only the yellow chanterelles, the others, even the bright red aspen, I blend in with the foliage. Often I know that you’ve found the mushroom, only stepping on him.”

In addition, color-blind people have difficulty navigating the signs, especially abroad. “People with standard color vision, seeing the danger sign, the faster they react to the color red, and not on the word “Attention”. We also have to read the pointer (e.g., where not to go, often marked by cross), the inscription on the sign,” explains Maxim.

In communicating with strangers, Kites tries to avoid phrases that would only be the color: “I never schedule a meeting “red house” because you are simply not sure that it is actually red. If I’m wrong, just say that I’m colorblind. Usually people take it with interest, arrange something like examination. Begin to question what kind of color I see their clothes, the surrounding objects”.

“When you work reportage photographer, the color scheme creates for you case. If I need to take a staged photo shoot, in advance to figure out what combination of colors I need, and I ask the model to wear a certain color” — he describes the intricacies of the process.

He even signs on the paint bucket color names to avoid confusion.

“For me, the world appears in shades of beige with bright splashes of orange and blue. But in the blindness, there are advantages, because the palette some of the colors I have are much richer than ordinary people. For example, if most of the sky on a Sunny day just blue, I discern in the sky, and blue, and purple, and cornflower, and azure,” explains Viktor.

In the home, says the artist, it is this feature that never stopped.

Except that sometimes before the woman uncomfortable if she wears, for example, a pink blouse, and I said to her: “that’s a nice green color.”Victor Circulatory

However, Chizhikov immediately clarifies: bright shades, he gets right: “If a person, for example, a bright green scarf, I would never call it brown. And of course, I know that grass and leaves on trees green. But if I’m freshly painted in olive green, the house is likely to take him for brown or brown.”

No funny stories in my life is not complete.

The artist recalls how one day he ordered to illustrate Krylov’s fable “Quartet”. The bear, of course, Chizhikov decided to paint in brown, just pencil the green. “Barely managed to cross the threshold of the house as my phone started ringing off the editorial staff. “Viktor, you have a green bear. It is the author’s idea or paint over?” — elaborate on them. I had to explain that I’m colorblind, and green my eyes transformerait brown,” he says.

Colorblindness Victor Chizhikova passed on through the maternal line his grandfather was also color blind. He realized that his perception that something is wrong in seven years: “We were with a cousin went to the forest to pick berries. He showed me on a Bush with green raspberries, and he went on to collect ripe red. And then laughed at me when I complained that raspberries I do not like. I once got sick eating sour, I started to gather berries from a Bush brother. And realized that do not distinguish red from green.”

By the way, in my youth, problems with the perception of Viktor Alexandrovich was more obvious. Over time, the difference is smoothed out. “Over a lifetime, none of the art editors who accept me the illustrations never suspected that I’m colorblind. Sometimes I talk about it — and all much surprised,” he admits.

“To drive a train I do not interfere”

His real name a resident of Kharkov Andrey Bezrukov asked not to be identified. The fact is that, being color-blind, young man a year and a half worked as a metro driver. And before that, she interned as the assistant engineer on the railroad. He now lives abroad but does not exclude that a year and a half wants to return Home and apply for work.