In Russia on a reconnaissance mission

Kommersant became known the date of visit of the American senators in Moscow. 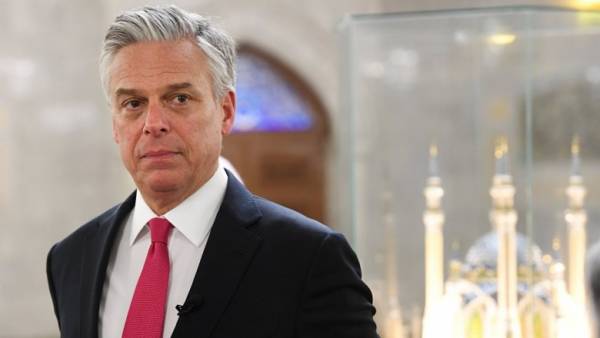 As it became known””, the visit of a group of U.S. senators to Moscow scheduled for June 30 — July 5. That such a visit is being prepared, informed the newspaper reported The Washington Post. Trip actively lobbied the U.S. Ambassador to Russia John huntsman. At the end of last year a similar trip was cancelled because one of the American women were in the Russian black list.

According to “Kommersant”, the visit of a group of U.S. senators to Moscow scheduled for June 30 — July 5. This information “Kommersant” informed sources in Moscow and Washington.

Previously, the Washington Post reported that U.S. Ambassador to Russia John huntsman is organizing the visit to Moscow of U.S. senators-Republicans. The publication notes that Jon huntsman is one of the few in the administration of U.S. President Donald trump, who supports the interaction between Washington and Moscow.

On a visit to Russia are going to come senators Richard Shelby, John Neely Kennedy and John Hoven.

According to John Huvane, John huntsman wants the senators came to Moscow “for understanding what is happening.” He said that we are working out the details of the upcoming visit.

Recall that a similar trip could take place in the beginning of the year, however, the Russian Embassy refused to issue a visa to a member of the congressional delegation Senator Jeanne Shaheen because she is a Russian “black list” compiled in response to U.S. sanctions against Russia. “The attempt to present the situation as if the visit was cancelled by the Russian side, biased and wrong. In fact, we have suggested other ways of resolving the situation, including the agreement under which visa parliamentarians will be provided on a reciprocal basis”, — was reported on the page of the Russian Embassy in the United States in Facebook. This option, involving a retaliatory issuance of U.S. visas to Russians who have fallen under US sanctions, as noted in the Embassy, the American side rejected.

While the rest of the delegation, which included Jeanne Shaheen, visa received. “We still support the continuation of inter-parliamentary relations and we hope that the contacts between the lawmakers of our countries, which unilaterally suspended by the U.S. Congress will continue,” the Embassy stated.

According to the publication Politico, Republican Ron Johnson and John Barrasso had intended to visit Russia with Jeanne Shaheen about the middle of January to “chat with the next generation of Russian leaders and the authorities to understand the prospects for Russian-American relations.”

In April, former Russian Ambassador in the United States, the first Deputy Chairman of the Federation Council Committee on international Affairs Sergei Kislyak told “Kommersant” that Moscow “in any case keeps the door open”. “If they (representatives of the United States.— “B”) are ready to talk respectfully, then we will not be”, — he assured.