Almost 60 opponents of the promotion of the LGBT community, was detained in Kiev

Moscow. June 17. INTERFAX.RU — Police in Kiev have detained several dozen people who came out early in the morning on the streets to prevent the holding of “March of equality” — the action organized by the gay community 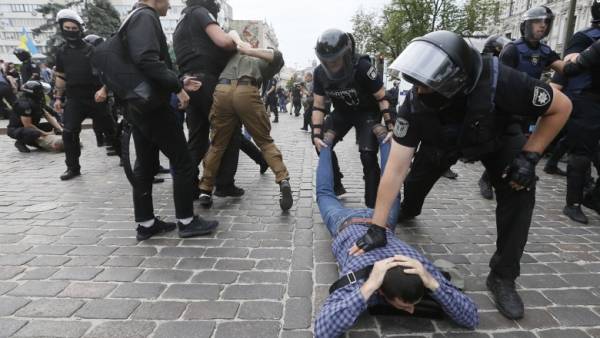 “More than 150 people came to an intersection of streets Vladimir and Taras Shevchenko Boulevard and blocked the road on the route of the “March of equality”, — said on Sunday morning, the press service of the police of Ukraine.

Police officers joined with these people in a dialogue, but they refused to release the passage, the report says.

“To avoid possible provocations and clashes, the guards pushed them from the road. Several men who resisted and used gas canisters, and detained,” — said the police.

In addition, as reported in police, near the hotel “Opera” is already a clash between opponents and participants of the “March of equality”.