The humane society of the U.S. city of Pasadena (CA) got a cat that weighs three times more than the norm. This publication reports the Huffington Post. 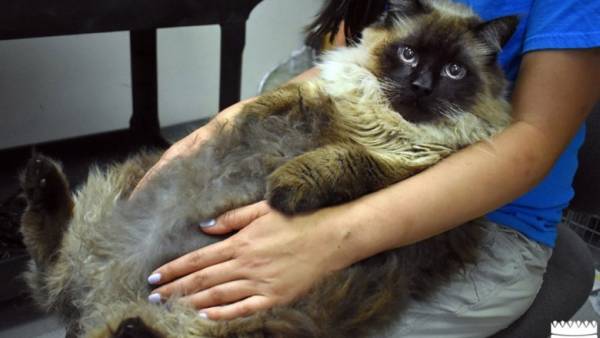 Huge cat noticed when he walked through the streets of the city. The animal was clearly overweight, and his hair tangled into mats that cause him pain. One of the neighbors decided that it needs help, and carried her to the humane society.

It turned out that the cat weighs 13 pounds — several times more than a normal cat’s weight, amounting to about 4-5 pounds. The organization was not cells of a suitable size, so it is temporarily housed in the office.

The animal, who was given the nickname chubbs put, was about ten years old, is a cross between Himalayan cats Persian color-point. The coat of this breed needs daily care. The cat cannot follow itself because of the excess weight.

The humane society announced that the chubbs put will have to wait for the owner until Sunday. If the owner doesn’t surface, it’ll give everyone.

In may it was reported that the UK’s competition will be held for weight loss among fat Pets. Among the participants this year, seven dogs, five cats and one rat. In total they will have to throw 75 pounds.