The singer of the Belle époque

As we remember Director Stanislav Govorukhin.

Director Stanislav Govorukhin has died in one of the suburban resorts after a long illness, it became known on Thursday, June 14. He was 82 years old. Today without him is almost impossible to conceive of a national cinema, nor the freedom of the perestroika years, the Herald which he largely was. The portal iz.ru — how we remember Stanislav Govorukhin.

Straightforward and even harsh in nature — not only in life but in art that Govorukhin simultaneously praised and criticized, he may have inherited from his father. Together with the Cossack love of freedom.

He was born in 1936 in the Urals. His father, Sergey Georgiyevich, was a hereditary don Cossack. However, the Stanislav’s father almost did not know — he and his mother separated before his birth, and in 1938 he is sent to camp in the framework of the Directive “decossackization” and disappeared somewhere in Siberia. Govorukhin and his sister, Inessa’s mother, a dressmaker, was raised alone.

In 1958, 22-year-old Stanislav Govorukhin graduated from Kazan state University with not only popular but fashionable in the early 1960s, the profession of geologist.

However, for it to work it did not.

In 1959, the future Director went to the Kazan TV Studio, one of the first in the country. After working there for several years editor and assistant Govorukhin went to Moscow, where he enrolled in the University. In the late 1960s he graduated with honors from his studies and received the diploma of the Director.

Almost immediately after the release Govorukhin went to Odessa, to work for a local film Studio. And it was there, in the late 1970s, a young filmmaker has made one of the main films, not only Soviet, but also of the entire national cinema. In the fall of 1979, the screens out the first series of the film “meeting Place cannot be changed”. 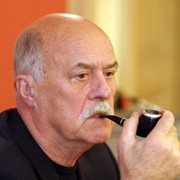 Soviet TV series based on the novel by Vainer brothers was the penultimate role of Vladimir Vysotsky and main characters — Gleb Zheglov and Vladimir Sharapov. Monuments they were installed not only at Petrovka 38 in Moscow but also in Kiev and Mariupol. And the Moscow monument of all is the youngest.

Selection so popular with viewers and performers of the principal roles — the achievement just a Director. Is Stanislav Govorukhin “selling” the candidate of young Konkin. And Vysotsky Govorukhin were just friends — when the Director had to leave for a few days from filming, his seat on the court he lost it to Vladimir Vysotsky.