For the person who more than anything loves well done steak with ketchup, the menu at the summit with the DPRK leader was not easy. 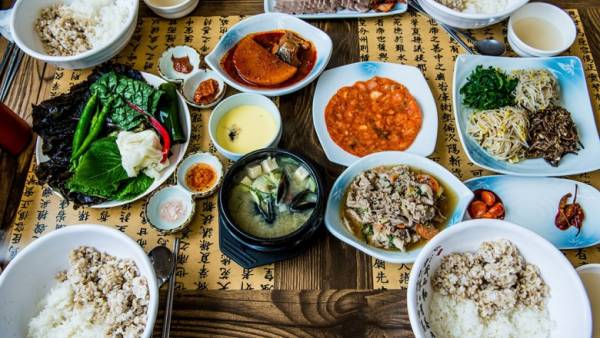 “Salad-kerabu of green mango with honey-lime dressing and fresh octopus”; “the Stuffed cucumbers in Korean”; “Stewed in soy sauce cod with radish and Asian vegetables menu at the summit in Singapore could not be puzzling trump, who has repeatedly said that more than anything, loves well done steak with ketchup.

Watching the summit, the users of Twitter in eager rivalry argued, whether there is a trump octopus and pardon the pun about the names of the dishes.

Octopus is on the menu. I don’t think that #POTUS will eat octopus. #TrumpKimSummit #SingaporeSummit #TrumpKim

The menu has surprised even the most sophisticated gourmets and connoisseurs of Korean cuisine.

Cucumbers stuffed with beef, potatoes and egg — a traditional dish, which appeared during the ly dynasty, who ruled the Great Joseon (then known as the modern Korea) from 1392 to 1897. This dish is loved members of the Royal family.

Imagine the British Prime Minister, eating roast Swan is one of the favorite dishes of Henry VIII — with the high-ranking guest.

It is not surprising that young Koreans, too, was puzzled by the presidential menu.

Some of them can be understood — mistakenly took the dish over the “OI, sabagy” — Kimchi cucumbers, part of the daily diet of Koreans.

“I wonder what flavor is it?” — wrote a Twitter user from South Korea.

Another dish “Daegu Jorim” should be more familiar to ordinary Koreans. It is meat, fish or vegetables that are simmered in a soy broth.

In the ordinary course Korean lunch this dish was served in small saucers.

Although the table was not cold noodles in Pyongyang (this dish Kim gave his colleague from South Korea when he crossed the border of the DPRK for the first time in April) Singapore hosts did everything to make Kim feel at home.

Being a wise and experienced diplomats, they did not forget about trump. It seems that the menu was composed in such a way that trump could collect his lunch, which would look appropriate in an affluent new York restaurant.

#POTUSTrump and #KimJongUn are having a “working lunch” at their meeting in #Singapore. There’s absolutely no truth to the rumor that one of the items on the menu was Beef Short Rib Covfefe. #SingaporeSummit #TrumpKimSummit #TrumpKim #NorthKoreaSummit pic.twitter.com/JN3IRHW8Ak

As an aperitif he could choose the “traditional shrimp cocktail with avocado salad”. The second — “beef ribs confit with potato gratin dauphinois and broccoli for a couple”. And for dessert, “vanilla ice cream Häagen-Dazs with a cherry coolie”.

And if there is any doubt that the ribs were intended to Trump, here’s a tip: the steak was supposed to be red wine sauce, but the meat is poured on top and served the sauce on the plate next. Trump, as you know, not drinking.

And all the Singaporeans who have spent a summit of $ 15 million, did not miss the chance to buy the famous guests and your kitchen. Singaporean cuisine is known that combines elements of Indian, Chinese and Malay dishes (in accordance with the three main ethnic groups).

Besides the confit, on the second the guests were offered “the combination of sweet and sour crispy pork, fried rice in Yangzhou with homemade XO chili sauce”, this dish is quite possible to meet at the Chinese restaurant of Singapore.

The XO sauce is made of good cognac (aged for at least six years — hence the abbreviation XO), dried scallops and shrimp, garlic and Chile.