Pashinyan announced a new stage in relations between Armenia and Russia

YEREVAN, 11 Jun — RIA Novosti. Prime Minister of Armenia Nikol Pashinyan at the meeting with the new Ambassador of the Russian Federation Sergey Kopyrkin said that relations between the two countries began a new phase, according to the press service of the government. 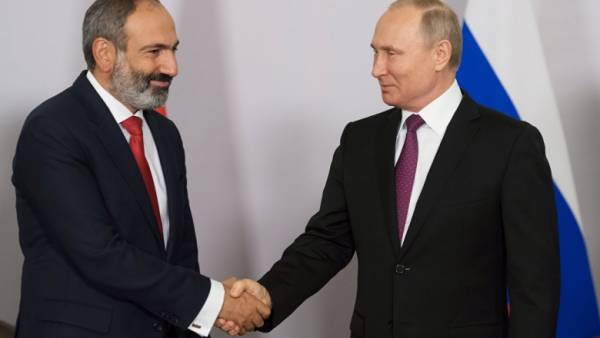 “Pashinyan stressed that the friendly and allied relations between Armenia and Russia began a new stage that the government is interested in developing cooperation in all spheres”, — stated in the message published on the website of the Cabinet.

According to the press service, the head of government noted the importance of effective cooperation in the framework of the EEU and the CSTO with the aim of solving the existing problems and improve the efficiency of integration processes.

“Kopirkin Pashinyan congratulated on his appointment and expressed confidence that as a result of his cooperation with the government of the Armenian-Russian relations will continue to develop and strengthen”, — stated in the message.

Kopyrkin assured that he will make every effort to give new impetus to cooperation between Russia and Armenia.

“The Ambassador noted that, given the historical relations between the two countries, feels a greater responsibility in your new position and ready to actively cooperate with the government to further deepen bilateral relations”, — noted in press service.