The exercise in Lithuania has faced four armoured personnel carriers

VILNIUS, 7 Jun — RIA Novosti. Four Stryker armored personnel carrier collided in Lithuania, suffered 13 of the U.S. military, who take part in military exercises in the country, reported the press service of the defense Ministry of the Baltic Republic. 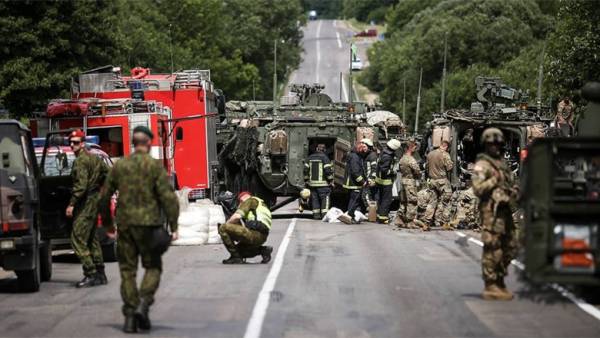 “On Thursday around 11: 00 (same as GMT) in Prenjska area on the highway Prienai Kaunas in the accident were four armored vehicles USA Stryker, who traveled in a convoy. According to preliminary data, injuries of different nature received 13 U.S. military personnel”, — is spoken in the message.

At the scene working doctors and the police. The victims sent to the Kaunas clinic for a preventive checkup. Road Prienai Kaunas is temporarily closed.

“The U.S. military taking part in in Lithuania in June military exercise “sword 2018”, — added in Department.

From 6 to 9 June on the territory of Lithuania in the framework of the exercise is the redeployment of the second cavalry regiment land forces of the United States — about 3 thousand American military personnel and 1.5 thousand units of equipment will be relocated from Germany to the Baltic States and Poland. From 18 to 21 June, the U.S. military will return to the teachings in places of permanent deployment.