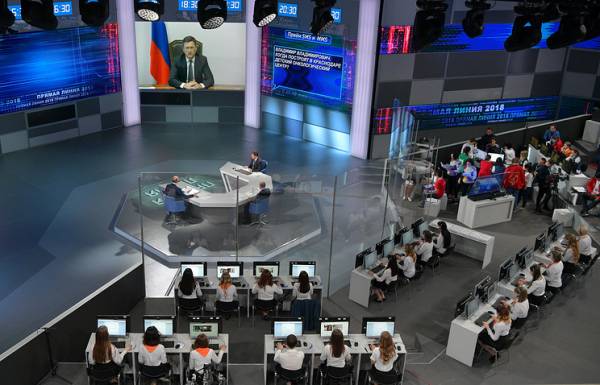 Vladimir Putin during a “Straight line” has answered questions of citizens of Russia and other countries. Putin communicates with the citizens in this format for the 16th time since 2001 and for the first time after his reelection in March 2018. The current “Direct line” had its own characteristics: in touch with the Studio in Moscow, there were Ministers of government and heads of regions, who live and answered questions on their competence. In fact, it reduced the response time to the citizens. What decisions are already being made on the basis of “Straight line” at the TASS.

A resident of St. Petersburg Alexey Karavaev asked a question about gasoline: how long will increase prices. “How can you stand it? Stop somehow this,” he said.

“This is unacceptable, wrong,” — said Vladimir Putin. He called this situation by the mismanagement in the energy sector, which led to the stimulation of export of crude oil abroad. And the oil companies, directing raw materials to oil refineries, consider the lost profit and increase the price of fuel to compensate.