Some of the answers of the President in the course of communication with the people. 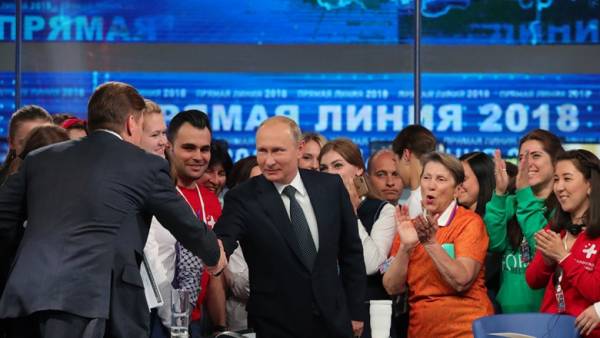 Moscow. June 7. INTERFAX.RU — on Thursday, received the next, already 16-I account “Direct line” with Vladimir Putin. For the first time in ten years, the annual event was held without spectators in the Studio, but had arranged a video link with members of the government and heads of regions who also answered the questions of the President and citizens. The stream lasted 4 hours and 25 minutes.

The main of the “Straight line”

— The current composition of the Russian government is optimal. “If we cleared the government and brought an entirely new people, we would have lost at least two years.”

— The increase in gasoline prices caused by the “tax maneuver” stimulating the export of oil, but what is happening is unacceptable and wrong.

The government has already taken a number of measures designed to resolve the situation, and to fall further measures will be taken.

— Flat rate personal income tax will remain, the sales tax will not be.

— The current Ukrainian leadership is unable to solve the problem of Donbass. “What is happening in General around these territories is, of course, sad.” Moscow will continue to assist the DNI and the LC.

— Russia must regain the lead in the number of space launches. “Space technology is extremely important for any country, and especially for ours.” “The new programme “Sphere” suggests a launch in the next few years, more than 600 satellites“that can lead “to an absolute revolution in the field of communication”.