The speaker of the Federation Council on the education of children, gender issues in politics and the digital future. 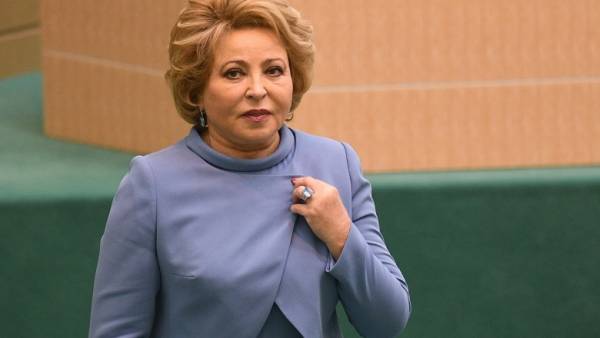 Former Ambassador to Malta and Greece, the Governor of St. Petersburg and Chairman of the Federation Council since September 2011. In the Western press Valentina Matviyenko called the most influential woman in Russia, she is under sanctions by the US, EU and Australia. Now on the agenda: the creation of the Ministry of loneliness, promotion of regions and the preparations for the visit to the DPRK. Remember her most interesting statements.

Well, I don’t like these gender issues, comparisons of women and men in politics.High post suggests that you sacrifice the interests of the family, can’t do what you want. You are constantly under fire from thousands of eyes.That’s like a starving man devours food, and so we after a long deficit in the corner-put the savings when people are evaluated not by the success they have achieved in life, but by what make of car the person drives.When it came time to serve my son, he came and said, “…can’t you pay to me in the army?” And I said, “No, you shall, you shall serve”. And he said, “You’re not a mother, you’re a Viper”.

(Although the fact that Sergey Matvienko was in the army, deserves respect, family Matvienko has been accused of nepotism — now Sergey holds the position of General Director of VTB-development, and is a dollar billionaire — Approx. ed.).

We are too emotional people. Always escalate the situation. An example from swine flu — bought masks, now they are in the tables. Spring feared floods swept from the shelves of rubber boots for the next three generations, now they need to sprinkle talcum powder not to spoil… Then stale buckwheat — raised the hype around it. All put it on the shelf, now it gets a bug.

About the attack on the painting by Ilya Repin, “”Ivan the terrible and his son Ivan on 16 November 1581”:

The tightening of responsibility for the vandalism will not have the desired effects. Such crimes are committed by mentally sick or drunk people.

(As in the case with Igor Podporin, which had consumed alcohol in the restaurant at the Tretyakov gallery — Approx. ed.).

Here we need to look at security. Why our museums sell vodka and cognac… On what basis in museums, cultural centers, you can drink alcohol?