The result pulls with whips

The police of Moscow has refused to the artist Alexander Ivanov, in the criminal case against attacked him in an inconsistent rally 5 may 2018 man in Cossack hat. Other victims that day from Cossack whips say the lack of investigation into their allegations. To the same point, the victims from the police. This was the reason for the complaints on the inaction of the authorities. 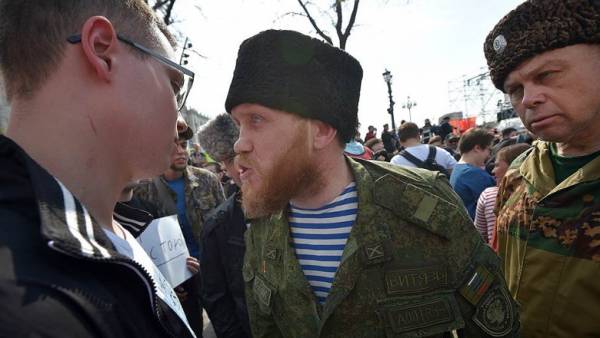 The artist Alexander Ivanov filed a statement about the attack on him at a rally on may 5 the office of internal Affairs on TSAO Moscow. He said that filmed on the phone as people dressed in Cossack hats, beat the protesters, using whips. One of them asked: “who are You?” “I said, “I am a Muscovite, was born here, this is my city”. After that, immediately followed by a shot forehead across my face,” — says Mr. Ivanov. “Ivanova with the broken nose was taken by ambulance to the hospital, where he underwent surgery”, — said “Kommersant” the lawyer, the lawyer of the human rights Fund “Public verdict” Svetlana Toreeva.

According to Mr. Ivanov, the bully was a resident of Yaroslavl Dmitry Zaitsev. The artist remembered him, later identified on video and tracked down the messages in the network. “The inquirer described the “Cossack” as the intentional infliction of harm to health (part 1 of article 115 of the criminal code). With such qualifications should contact the police and to the magistrate. But we believe that there is a violation of part 2 of article 213 (hooliganism committed by group of persons). The police may initiate proceedings under this article, the punishment is not just a fine and imprisonment”, — explained Ms. Turaeva. “We filed a complaint to the court and to the Prosecutor at the police’s decision, and the statement to the Ministry of justice with a request to check, the number of birds in registered Cossacks”, — said the lawyer. However, representatives of the Yaroslavl city Cossack society earlier reported that Mr. Zaitsev is not a member of the organization since 2013.

“Our lawyers defend two victims at the hands of the Cossacks in Moscow. Applications were submitted in the TFR in Moscow, but still there was no reaction”, — told “Kommersant” representative of human rights organization “Area law” Bulat Mukhamedzhanov. One of participants of meeting people in the form of the Cossacks was beaten with fists and a whip. 17-year-old Daria kicked. She subsequently found on the Internet attacker of man. The statement in the TFR, written by her mother, says that it is a native of Mozdok Sergei kanibolotskiy.

Recall that after the protest, the head of the Moscow Department of regional security and counteraction of corruption Vladimir Chernikov said that the municipality of Moscow has not attracted the Cossacks for policing.

It should be noted that in Rostov-on-don soon the Cossacks will patrol the streets with police. Deputy ataman of the “great don army” Mikhail Bespalov said that 300 Cossacks will keep order during the world Cup. The Cossacks promised to break up the fighting, and to fight against LGBT people.

Meanwhile, as “Kommersant” found out, a number of victims on may 5, the police also noted that the investigation of their cases is not conducted.

So, the lawyers “Area of law” represent the interests of 13 people. “It is the residents of Moscow, St. Petersburg, Krasnoyarsk, Krasnodar and Chelyabinsk, — said Mr. Mukhamedzhanov.— The petitions were filed in the TFR, reaction yet”.

The injured journalist “MBH Media” Alexander Skrylnikov told “” that with him still not been contacted by any employees of the TFR nor the representatives of the police Department for the Tverskoy district after allegations of beatings. His counsel, lawyer of public movement “Open Russia” Sergey adamsin filed a complaint against the inaction of the TFR. Mr. Skrylnikova in the hands of a television microphone when one of the officers struck him with a baton on the back.

Some applications still accepted. Krasnodar lawyer Andrew Avanessian, collaborating with the “Area law”, told “Kommersant”, the TFR leads verify the statement of his client Dmitry Svitava. He complained about the beating in a police station in Krasnodar, where he was taken after the protest. Also, Mr. Avanesyan is awaiting verification by another statement, which included 30 names of participants in the protests reported beatings in the police building.

Employees RCDS are checked at the request of a resident of Krasnoyarsk, told “Kommersant” the lawyer, the lawyer of the Fund “Public verdict” Victoria, Brester. “The applicant is a medical doctor by profession. Seeing that on the ground lay a man, surrounded by police officers, he came over to help. However, one of the policemen hit him in the chest so he fell backwards and hit his head on the asphalt. Doctors have diagnosed — cranial-a brain trauma of easy degree,” — said Mrs. Bruster. According to her, investigators have interviewed the witness. “Waiting for the decision of the TFR. Office check of the Ministry of internal Affairs has already shown that the guilt of the police officers there,” added Lord Brester.