Simferopol and Kiev argued about the causes of the Crimean drought

On the Peninsula do not associate the emergency with the overlap of the North Crimean channel. 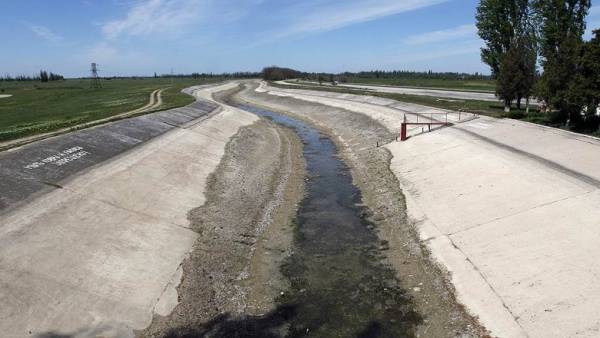 Ukrainian MP Mustafa Dzhemilev, said that the drought in the three Northern regions of the Crimea caused by the overlap of the Ukraine, the North Crimean channel. It on the Peninsula until 2014 did the water from the Dnieper river, which was used for irrigation of agricultural land. We will remind, on the eve of the Crimean authorities introduced a state of emergency because of the drought and destruction of part of the grain harvest in Krasnogvardeysky, Nizhnegorsky, Soviet and Pervomaisk areas. Respondents ‘ b ‘ experts the statement of mister Dzhemilev called contrary to the laws of geography and ecology. The Crimean authorities have assured that the emergency arose because of the element, which is natural, and drought threatens only to farmers.

Deputy of the Verkhovna Rada of Ukraine Mustafa Dzhemilev in his interview to the “observer” stated that the reason for the introduction of state of emergency in four regions of the Crimea was the Ukrainian authorities overlap of the North Crimean channel through which the Peninsula was filled with water from the Dnieper.

There really is a problem after we blocked the Dnieper water, there’s even already there is no agriculture.Mustafa Jamieveatch the Verkhovna Rada of Ukraine

We will remind, the head of the Crimea Sergey Aksenov has entered a mode “an emergency situation of natural character” due to the drought in four districts of Crimea by decree on 4 June. For controls set to “regional-level” response.

The reason for conducting the disaster was the fact that the drought caused the crop area of about 18 thousand ha in Krasnogvardeysky, Nizhnegorsky, Soviet and Pervomaisk areas.

“The Ministry of agriculture until June 30, 2018 it is required to prepare and submit to the Ministry of agriculture of the Russian Federation a package of documents for consideration and decision on the allocation of Federal budget funds for implementation of compensation to agricultural producers in Kazakhstan for damage caused by emergency situations of natural character”, — is told in the decree of the head region.

The water in the North-Crimean canal to Crimea has stopped in the spring of 2014. The Chairman of the Crimean Republican Association “Ecology and peace” Viktor Tarasenko said “Kommersant” that the application of drought because of its ceiling are “political in nature” and contrary to the laws of geography and ecology. According to him, the climate has its cycles. The previous three years in the Crimea fell enough rain that made it possible to gather a good harvest of grain. “But the climate is the sine wave. Precipitation-rich years are replaced dry. For Crimea there is nothing unusual here,” said Mr. Tarasenko.