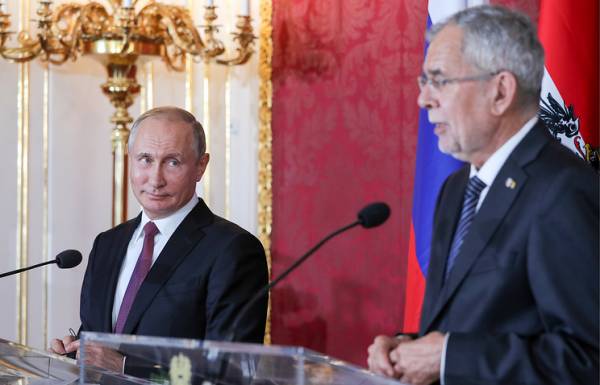 MOSCOW, June 5. /TASS/. Working visit of Russian President Vladimir Putin in Austria was an eloquent sign of the continued willingness of both countries to develop cooperation on the international stage and strengthen mutually beneficial economic cooperation.

The Russian head of state following talks with Austrian President Alexander van der Bellekom appreciated the desire of the Austrian leadership to contribute to the normalization of relations between the EU and Russia. Putin said that Moscow has no problems with the lack of trust that Russia remains open to cooperation with European countries. At the same time he stated that “sanctions, and any politically motivated restrictions, protectionism is harmful to all,” including and themselves initiators.

The Austrian President said that dialogue with Russia is very important and stated that “peace in Europe is only possible with Russia, and a number of international problems can be solved only together with Russia.”

During the visit, timed to coincide with the 50th anniversary of the signing of the first contract for the supply of natural gas from the Soviet Union to Austria, “Gazprom export” and the Austrian company OMV Gas Marketing & Trading GmbH signed an agreement on Russian gas supplies until 2040.

With the hope for the lifting of sanctions

The presidency of the EU Council from July 1, goes to Austria, it is not surprising that the issue of intensification of dialogue between Russia and the European Union, as well as about the prospects of the probable lifting of sanctions was Central to the talks between Putin and van der Ballena and Kurtz.

“Dialogue with Russia is very important not only for Austria but also for the EU. Russia is a real part of Europe,” said Austrian President. “Good relations with Russia – for me it is not only a political matter, but my personal,” added van der Bellen, whose ancestors from the late seventeenth to the early twentieth century lived in Russia. “We live in times of increased tension. Austria committed itself to contribute to détente. But I must say that Austria on the issue of sanctions adheres to the EU” – said Austrian President.