Putin visited the patients of the Morozov children’s hospital

MOSCOW, June 1. /TASS/. The President of Russia Vladimir Putin in the international day of protection of children visited the new medical building of the Morozov children’s city clinical hospital. The head of state toured the clinic and spoke with staff and patients. 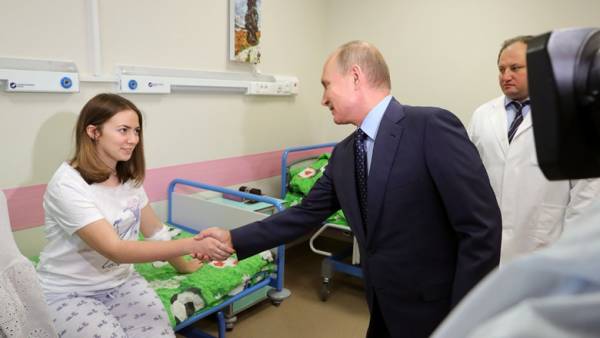 In particular, Putin came to the house 16-year-old girl who is undergoing treatment after a stroke. The President enquired about her health. He also had detailed discussions with the doctors about how there took place operation.

After that, the head of state came to the house to six-year-old Sam, who is recovering after surgery for a kidney transplant. “Are you the President?” — Savely said that Putin nodded.

The boy has shared with the President their impressions of the hospital. He said that he does not love the treatments because they are painful, and also that likes to read magazines, watch cartoons and wants to be discharged. “Patience, my good,” — said the President.

About the new building the hospital, which can accommodate 500 people and includes the center for children’s stroke, Putin has told the head physician of the clinic and the mayor of Moscow Sergey Sobyanin. In particular, the head of state said that the hospital receives each year more than 120 thousand patients.

During the clinic visit, Putin also attended the sharing session with the hospital in Sebastopol.