On the bridge in the Crimea took place the first accident

SIMFEROPOL, 1 Jul — RIA Novosti. The first traffic accident recorded on the bridge in the Crimea, has done without victims: passenger car in compliance with the distance collided with a passenger bus, the press service of the customer of construction — PKU uprdor “Taman”. 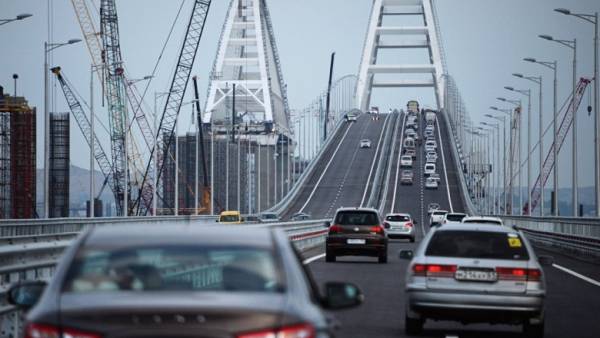 “For the last 16 days was one traffic accident: during the day on 142 km of A-290 (a kilometer after the entrance of the bridge from the Taman) passenger vehicle failure to comply with the distance collided with a passenger bus. There were no injuries. Limitations in motion were not introduced. The participants drew up a Protocol about the accident in simplified form”, — stated in the message.

The representative of the building owner also noted that the main violations of traffic rules on the Crimean bridge are speeding and stopping.

At the same time with the second week of the road managers, production control Center (MCC) the Crimean bridge record the reduction in the number of traffic violations.Uprdor “Taman”

Thus in may the operational service of the Crimean bridge conducted the evacuation of 17 vehicles, including three buses. The main reason is vehicle breakdowns.

The road on the Crimean bridge — a site of Federal road A-290, 141-160 miles. Is in operational management of PKU uprdor “Taman” Federal road Agency. The route of 1B grade, four lanes with a capacity of 40 thousand cars a day. The maximum permitted speed is 90 km/h. Stopping on the bridge is prohibited.

A bridge to the Crimea from the Krasnodar region — the longest in Russia, its length is 19 kilometers. The beginning of the movement of vehicles originally planned for December 2018, but the work was completed ahead of schedule. Russian President Vladimir Putin may 15, opened the automobile part of the bridge across the Kerch Strait, the movement of vehicles running on 16 may.