In “the Russian passport” found error

Why ID in a single database might be considered to be invalid. 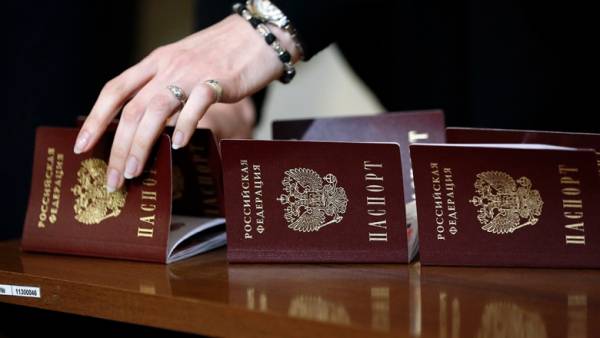 Of the MIA of Russia for the first time officially explained to “Kommersant” causes major problems with the documents of Russian citizens, their passport may be mistakenly considered invalid in the database UAIS “Russian passport”. We are talking at least 1.5 million identity cards. In the end, the citizens face a number of difficulties, the most common of which is the denial of banking services. The interior Ministry explained that the failure occurred previously while merging databases.

A resident of Moscow Natalia Ivanova came to the Bank on April 26 of this year for the card. The Bank employee asked for her passport and then reported that the document listed as an invalid. “I’m a Muscovite. Passport I didn’t lose any, received in 2004, and since then it has not changed. With the Bank I once had a relationship, literally the day before my passport did not cause any issues”, — told “Kommersant” Mrs. Ivanov. At the Bank, she was told to contact the main office for migration (GOWM) of the MIA of Russia. In the end, Ms. Ivanova had to write an appeal to the police to answer it promised only a week. Then Ms. Ivanova learned of the existence of the service on the website of the Moi of Russia “checks on the list of bad Russian passports”, where the document was marked as invalid.

The service is open, stated that “the information provided is not legally relevant”.

You can check passport number online or download the latest list and report an error if the passport, according to the citizen, is valid. The counter shows the number of corrected with the help of citizens information. It is growing every day: on the evening of may 30, 2018, the scoreboard showed 1 475 604, from the previous day, the increase amounted to about 1 thousand patches. In all likelihood, this is the number of passports incorrectly recognized as invalid.

Internet forums for the last few years are full of complaints about problems due to a supposedly invalid passport. “A colleague buys the land, the transaction is carried out and gave the documents to companies house. Call saying that your passport is invalid. Checked (on the basis of passports.— “B”), the husband of the same. On the job check, the head of the personnel Department is also invalid. How is this possible?” — wrote on the forum a resident of Volgograd in October 2013. “Comes SMS from the Bank that my passport is invalid, for three days, you must confirm a valid passport or I will be limited to debit transactions,” — said in November 2015 Alena from Smolensk on the mothers forum. “Faced with the problem of when withdrawing money from the Bank account. Was blocked salary card,” writes in may 2017 Vlad from St. Petersburg on forums, explaining that the interior Ministry’s passport was invalid.

A resident of eagle by the name of Morozov tried in 2014 to obtain from the Federal migration service of Orel financial compensation. In court Ms. Morozova explained that in October 2013, went to Moscow to sell shares in the company. However, the deal did not take place as the document appeared in the list of invalid passports in the FMS website. Later, the regional Federal migration service issued a certificate on the validity of the document. The Northern regional court of the eagle in the claim is refused. The plaintiff “did not provide documents about the official refusal to conclude the transaction on the grounds associated with information about an expired passport,” reads the appellate court decision. The court also noted that the service passport check is not legally significant.

Advocate capital advocate Bureau “Business fairway” Mikhail Filippov in this regard, said “Kommersant” that has no chance to win, filing a claim against the state, but if the organization denies the consumer in the provision of services on the basis of information from the registry, the latter shall have the right to address in court with the claim about compulsion to conclude the corresponding contract. “The court also may require the organization to indemnify its decision losses,” added Mr. Philip.

In the Russian interior Ministry in response to the request to “Kommersant” admitted that problems with the status of passports arise due to technical failure.

The Ministry explained that the passport of the citizen of the Russian Federation issued in 1997, until 2006, information about the documents included in disparate databases. It should be noted that during this period the base was in charge of passports of the FMS, disbanded in 2016 (functions transferred to the Ministry of interior). “In 2006, in order of formation and introduction of the unified automated information system “the Russian passport” was produced by the Union of previously disparate databases of passports, — said “Kommersant”, the acting Deputy chief of Department on interaction with institutes of civil society and the media, the Ministry of internal Affairs of Russia Yevgeny Artyomov.— In the absence at that time have the technical capabilities when you download information from various surveys, the status of some of the passports changed from “valid” to “invalid””.

The solution is entrusted to the citizens themselves. “In order to minimize the negative consequences associated with providing false information on passports of citizens of the Russian Federation service was developed for checking the passports on its validity/ invalidity, which allowed to check your passport status through the official website of the MIA of Russia in the section “Checking the list invalid Russian passport”,” — said Mr. Artemov. Identified errors corrected by territorial bodies of the Ministry of internal Affairs “as soon as possible”. If necessary, the Russians can obtain police official confirmation on the validity of their passports. The Ministry said that due to a failure in the database, the citizens will not be able to register on the portal “public Services”. This can be fixed after corrections in UIAS “Russian passport”.

Representatives of the banking sector told Kommersant that using a list of invalid passports in the Ministry of interior in accordance with the law.

“This requirement 499-p of the Bank of Russia’s regulations “About” identification”, — told “Kommersant” Deputy Chairman of Board of Bank “the Renaissance the Credit” Sergey Korolev. In paragraph 2.2 States that “when identification of the customer, the credit institution uses the information from the open information systems of state authorities”, including the list of invalid passports. Mr. Korolev noted that while working with the database of the interior Ministry “there are a few mistakes.” “Service in General is good. There are a few problems with the quality of the data. It would be nice if the interior Ministry in daily discharge includes data on the reason for the invalidity of the passport, as well as provide unloading of valid passports,” he says. “Sberbank does not comment on the quality of information placed on the official page GUVM of the MIA of Russia “checks on the list of bad Russian passports””, — explained “Kommersant” in the Bank.

The head of the Committee for countering money laundering and financing of terrorism the Association of Russian banks, Inna Rodriguez confirmed “Kommersant” that the use of the base required by the provisions of the Central Bank 499-p and the error it encountered. “In addition, there are discrepancies between the data that is visible when checking in online and checking through the boot file from the same site that is certainly very difficult to work with banks”, she added.

To the question “Kommersant”, can this lead to repeated failure and whether it is necessary to constantly check the status of passports, the interior Ministry has not responded.