YANAO got the youngest Governor

Acting head of the region, the Deputy of Dmitry Kobylkina. 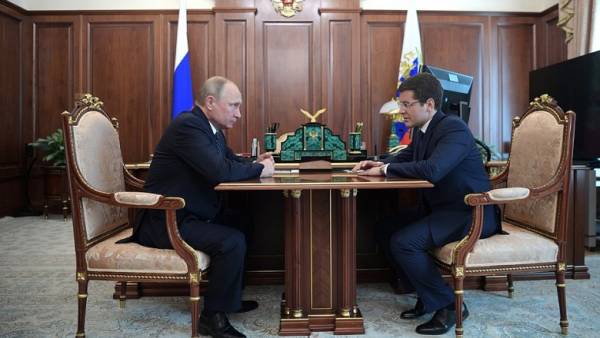 President Vladimir Putin during a working meeting invited the Deputy Governor of the Yamalo-Nenets Autonomous district Dmitry Artuhova to lead the region. His predecessor Dmitry Kobylkin went to work in the White house. Mr. Artyukhov is the youngest in the Russian governors.

Dmitry Kobylkin at the head of the YANAO was replaced by his Deputy Dmitry Artyukhov. According to “Kommersant”, he is appointed acting Governor of Tyumen region, Aleksandr moor, took part in the contest “Leaders of Russia” and passed the so-called training of governors, was included in the management personnel pool under the patronage of the presidential administration. The former head of the Yamal-Nenets Autonomous district Dmitry Kobylkin, who led the region since 2010, became Minister of natural resources and environment.

Dmitry Artyukhov became the youngest representative of the governors in Russia — he this year only 30 years old. Prior to that, the status of the “young” head of the region was the Governor of the Kaliningrad region Anton Alikhanov (1986). Mr. Artyukhov was born on the Yamal Peninsula after the mA and PhD programs Tyumen state University received an MBA from the Singapore management University. In the Governor is working since 2010 in 2016, he became Deputy head of the region.

In YANAO, which is part of the “nested doll” of the Russian Federation (Yamalo-Nenets and Khanty-Mansi Autonomous Okrug considered part of the Tyumen region, but legally, the Union has not taken place), the multilevel electoral system. 40 days before the voting day the head of the Tyumen region shall submit to the President not less than five candidates for the position of Governor YANAO. Of them, Vladimir Putin will select three and present to the legislative Assembly of Yamal, which in the single day of voting will choose from them the head of the region.

Earlier today Vladimir Putin appointed acting head of the Tyumen region the city Manager of Tyumen Alexander moor is to head the Ministry Vladimir Yakushev. Also to work in the White house became the Governor of the Amur region Alexander Kozlov, the appointment of acting in the region is expected in the near future. The most likely candidate for the post call of zampolpreda of the President in far East Federal district Vladimir Solodov.