Traffic restrictions: what streets will block in the near future

Repair of engineering networks are in the area Sokolnicheskaya square, October, Rainbow, Large Kosinskaya the streets and the street Raspletina.

In connection with the work on engineering networks, which will begin this summer on some streets of Moscow will be limited movement. About changes in the routes of drivers warns the Moscow transport complex. 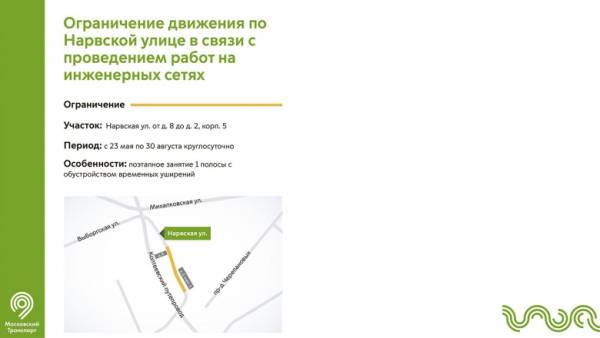 From may 16 to June 15 will work around the blocked one lane on sections:

— Sovetskaya street at the area of intersection with International street;.

From 14 may to 30 June the movement will be restricted on sections:

— Sheremetievskaya street near the house 17, building 2;.

From may 31 to August 10, will block one lane on the street letchika Babushkina from the house 9, building 1 home 5 in connection with the reconstruction of engineering networks on Rainbow street.

From 28 may to 19 June, daily from 01:30 to 05:30 limit road traffic in Sandy lane near the Church of the resurrection. From June 19 to July 30, the clock will be blocked one lane at Sokolniki alley in the area from house to house 4A 4, buildings 1, 2 at Sokolniki area.

From 28 may to 17 June, partially block one lane in the street Raspletina in house district 6, the housing 1. And from 22 to 31 may and from 10 September to 14 October on the Berzarina street house district 15A, building 1 travel will also be limited due to overlap one of the stripes.

Some roads will block until the end of the year: from July 25 to 30 December will not be able to pass through the Central street from the house 27 to 1 and the house on Chekhov street from the intersection with maple street to the house 55. From 1 August to 30 Dec for motorists will be unavailable the Local fare in the heart of a dead end street.

Besides, from-for repair of engineering networks on the Big Kosinskaya street traffic will be limited to the following areas: