The Ministry recalled the “Christ in the tomb”

The Vyborg court requested the deletion of the painting from the Museum Fund of the Russian Federation. 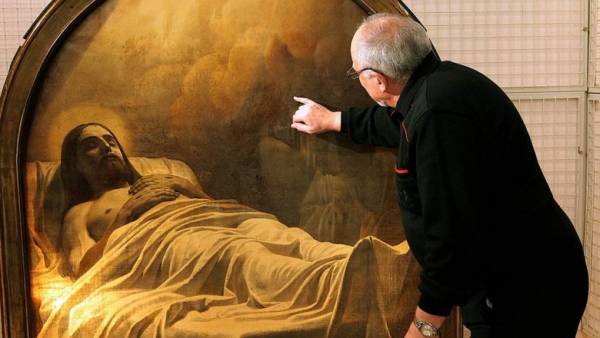 As it became known””, the Vyborg city court ordered the Ministry of culture until June 1 to eliminate the picture of Karl Briullov “Christ in the tomb” from Museum Fund of the Russian Federation and the Russian Museum collection. Officials should ensure in the same time the access of the customs authorities, arrested in 2003 masterpiece to make arrangements for his return to collectors from Germany to Alexander and Irina Pevzner and to report thereon before the court. To execute the decisions of the constitutional and Supreme courts (CC and CS) on the abolition of the confiscation of paintings by the Ministry of culture is still officially refused.

This is the third treatment of the Vyborg city court to the Ministry of culture about the need to execute the decision of VS on the return of the paintings by Karl Briullov “Christ in the tomb” its owners, Alexander and Irina Pevzner. The letter, the acting Chairman of the city court Svetlana Kiseleva (a copy is in “Kommersant”) to the Director of the Department of cultural heritage Ministry of culture Yuri Evtyugina entered the office on may 4th. The letter stated that the painting is registered in the State catalogue of Museum Fund of the Russian Federation under the number 7801152 in accordance with the decision of the Presidium of the Supreme Soviet of 14 June 2017 abolish its confiscation “to be returned” gentlemen Pevzneru. The Ministry’s prescribed the “delete picture” from Museum Fund of the Russian Federation and the list of the State Russian Museum (state Russian Museum) and “provide access” to her customs for “proper registration”.

The Vyborg court that is responsible as first instance for execution of the decision of the Presidium of the Supreme. We will remind, the picture is almost 15 years appeared as a pair in the case of smuggling (incorrect customs clearance), excited, FSB vs Alexander Pevzner in 2003 and passed after 10 years in the Central court, which has stopped criminal prosecution of the collector due to the expiry of the limitation period.

All this time the picture is stored under arrest in timing: first as evidence, and after the confiscation as part of a collection.

However, to implement customs clearance procedure is impossible because of the refusal of the Ministry of culture to eliminate the masterpiece of the Museum. At the same time officials of the Ministry of culture claim despite the court’s decision that the point is not delivered, and the production on it is still ongoing allegedly at the direction of the sun. This, in particular, said first Deputy Minister Vladimir Aristarkhov.

In April the lawyer of the collectors Maxim Krupsky wrote to Mr. Evtyugina that the Ministry of culture “illegally holding private property in the state part of Museum Fund does not perform an enforceable court decision about the painting, ignoring the legitimate appeal of the Vyborg court and creates obstacles to the Russian Museum in the transfer of the paintings to the customs authority and the rightful owners”. The lawyer reminded the officials that “willful failure to perform judicial decisions, or hindrance to its execution constitute an offense under article 315 of the criminal code”. And the Federal constitutional law “About judicial system of the Russian Federation” not only entered into force decisions of the courts, but also “their legal orders, requirements, and other treatment” are “obligatory for all without an exception of state authorities and subject to strict implementation throughout the territory of the Russian Federation”.

See also: the Hermitage have exposed the damage