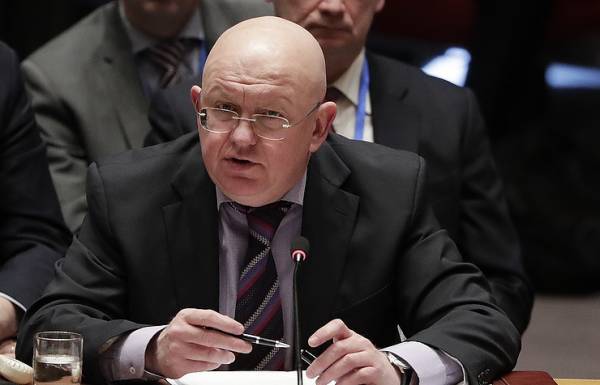 UN may 30. /TASS/. The Security Council on Tuesday held the first of February 2017 public meeting on the situation in the East of Ukraine. Breakthrough in resolving the conflict during this time did not happen, and have not changed the nature of the debate on this subject in the security Council. Western countries continued accusations against Moscow, the Russian side urged them to take a sober look at what is happening in Ukraine, instead of blindly trusting what the official Kiev.

Poland, who organized the meeting as Chairman of the UN security Council, was invited to the meeting of the two rapporteurs from the UN under-Secretary-General for political Affairs American rosemary DiCarlo and assistant Secretary General for humanitarian Affairs Ursula müller – the head of the Special monitoring mission (SMM) of the OSCE in Ukraine Ertugrul Apakan.

Last, speaking via video link from Minsk, said that since the beginning of the year, SMM filed “100 thousand violations of the ceasefire” and 107 cases of deaths of civilians. According to him, the last time the intensity of the fighting increased, and “urgent action is needed” in order to ensure compliance with the silence regime. He urged to pay special attention to the protection of civilians and civilian infrastructure.

Rosemary DiCarlo urged the international community not to give up and to continue the search for a peaceful solution to the crisis in Ukraine, while Ursula müller reported about the acute shortage of funds for humanitarian operations in the region. “In 2018, humanitarian workers planning to assist and provide protection to 2.3 million people. However, we are faced with huge challenges in access and financing. We received only 13% of the $187 million requested for humanitarian response,” she said.

Noting the extremely difficult situation in the field of health and social services, Deputy Secretary General announced the good news: according to her, UN “after considerable effort” has expanded its presence in uncontrolled Kiev areas. “We hope that this will help to increase the provision of critical, impartial, neutral and independent humanitarian assistance to millions of needy people,” she said.

The Malaysian Boeing and the new initiative of Poland

In the meeting, which lasted about three hours, was attended by the foreign Ministers of the Netherlands and Poland that most of his speeches were devoted anti-Russian rhetoric.