Matvienko said that Russia is ready to support the family Babchenko

Moscow. May 30. INTERFAX.RU — Russia is ready to support the victim’s family in Kiev, journalist Arkady Babchenko, said the speaker of the Federation Council Valentina Matvienko. 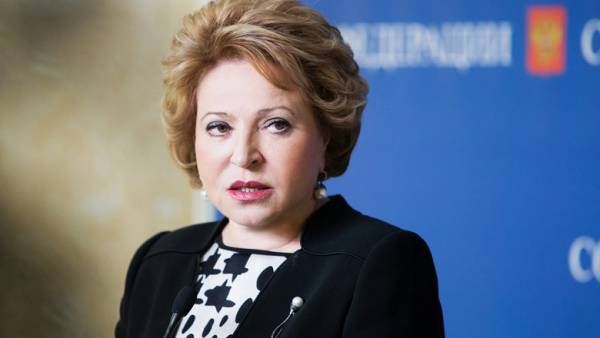 “I want to Express my condolences to Arkady Arkadievich Babchenko. No matter what political position he may hold, no matter how he belonged to Russia, but this man, who at one time fought for it. This is the man who left six children, and Russia is ready to provide assistance and support to his family,” said Matvienko reporters on Wednesday, commenting on the murder Babchenko.

According to Matvienko, “the capital of Ukraine essentially became a “hot spot”.

“Maybe it is necessary to consider the question to be directed to the war correspondents — people who have experience in “hot spots,” she said.

In addition, the speaker of the Federation Council believes that the accusations of Kiev of Russian involvement in the murder of Babchenko is the expected story.

Probably not haunted Russophobic glory with the “business Skrypalia” and decided here to trample on a man’s death.Valentine Matvienkova Of The Federation Council

In the Dneprovsky district of Kiev on the evening of may 29 near his apartment, was shot by a citizen of the Russian Federation, the journalist Babchenko. A criminal case under article 115 UK of Ukraine (premeditated murder).

The chief of police in Kiev, Andriy kryschenko said that the first obvious version of murder professional work of the journalist. Police released a composite sketch of the suspect in the crime.