The Agency gets rid of the legacy of the previous administration. 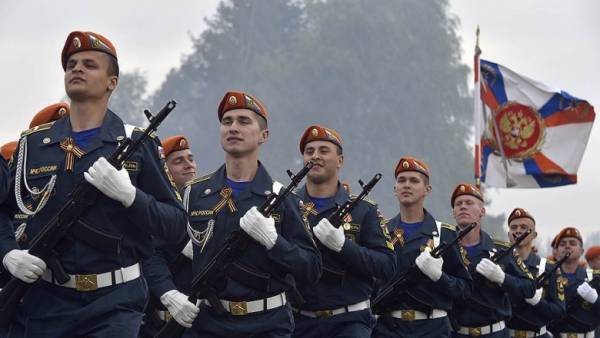 The new leadership of the EMERCOM of Russia has launched large-scale internal audit. The results, say Kommersant’s sources, will be reported to the Kremlin and the White house. According to them, the reform within the Ministry “received a carte Blanche to the top”. The Department has cancelled a number of orders and instructions of the former head Vladimir Puchkov. In parallel to all territorial bodies of the Ministry of emergency situations left the order until 31 may to prepare and submit a list of problematic issues of the “everyday activities” such as personnel and logistical support.

To establish a working group to conduct a comprehensive inspection of the state of Affairs in the system of MES was announced on a conference call held may 25. According to its results, acting first Deputy head of the Ministry Alexander Chupriyan has signed a Protocol with the relevant instructions (document is at the disposal of “Kommersant”). In it, the heads of all structural divisions of Central office, territorial bodies and institutions are required to submit to the working group “all the necessary documents and materials.” The management boards are also mandated in the period to 31 may to prepare and submit to the Department of operational management and structural subdivisions of the Central apparatus of the Ministry, “the issues of organization of daily operations, including staffing, logistics and other issues requiring solutions.” Generalized complex internal issues you plan to discuss with the heads of territorial bodies of Ministry of emergency situations in the framework of the international salon of means of safety “Complex security-2018” to be held in Noginsk on June 6-8.

“When you change leadership, you should analyze activities to understand what budget, what is the state of that equipment. It is necessary to prepare the minimum program and the maximum program of work of the Ministry”, — said the employee of the Ministry.

A working group that will deal with the analysis, headed by the chief of National control centre in crisis situations of the Ministry of emergency situations, Lieutenant-General Viktor Azucena. The results will be reported to the White house and the presidential administration, says a senior source “b” in the government: “let’s See what you find there, but the one to dig as deeply as possible already.”

Teleconference on behalf of the new head of the EMERCOM of Yevgeny Senicheva spent veteran service Alexander Chupriyan (putting out fires since 1979). One of the government interlocutors of “Kommersant” believes that the affirmations of the separation of powers in the Department. According to him, General Chupriyan will take over all operational management of the MOE, and Mr. Senichev, at least at first, focus on solving human and organizational issues.

Kommersant’s source close to the presidential administration, says that the appointment of Eugene Senicheva, whose career was primarily associated with the service in state security bodies, was initiated by Vladimir Putin, the security officer who was Mr Senichev.

Friends describe him as very private person who carefully avoids publicity (according to “Kommersant”, because of this, Eugene Zimichev asked to exempt it from fulfillment of duties of the Governor of the Kaliningrad region), but called “Executive unconditionally and is extremely reliable.”

“It is not associated historically with the MOE, so it will be easier to see the problems that exist in the Ministry. In addition, it is equidistant from other security officers from the Minister of defence, Sergei Shoigu, is still closely watching the fate of the native Ministry”, — says the source “b” in the direction of one of power departments. He notes that it is wrong to speak of the unpreparedness of Eugene Senicheva to work independently in emergency situations: on a post of the Deputy Director of the FSB, he was well informed about the problems of the Department, therefore, “the scale of the difficulties he is very good” and carte Blanche to carry out any necessary change personnel or organizational nature were issued to him during the negotiation phase. According to “Kommersant”, to get to work he will be able to rank the General-the Colonel: the increase will be needed for him to comply with the subordination, as the title of the same Alexander Chupriyan is now higher.

Meanwhile, the MOE has already started the reform. While they are a number of solutions ex-the Minister Vladimir Puchkov. So, Deputy Minister Pavel Baryshev instructed to organize the work “on amendments to the rules of wearing uniforms by the employees of EMERCOM of Russia, in terms of wearing hats”. We are talking about the return to the uniform cap instead of orange berets entered when Mr. Puchkova.

“The beret was like a red rag to a bull. They took it as complete surrender: victory flooded the military leadership of the Ministry of emergency situations on fire, — said “Kommersant” the firefighter, who asked not to mention his name.— Officers did not wear berets in exchange for a penalty from the authorities. Their abolition has a symbolic meaning: is a signal that the policy is completely changed. So Chupriyan and started with the berets.”

Another order of Alexander Chupriyan, record conference calls, regarding the staffing of fire protection. Under the previous Minister the assignment of new ranks, and recruitment was closed in the Central certification Commission (CAC), which was headed personally by the head of Department. Now with this practice decided to end it. “Ordered that the CAC no longer have to decide questions of appointment soldiers, have been sent out. She needs to certify the commanders of the main departments, their deputies, Central office. Other issues concerning the state, will now be handled on the spot”, — said the interlocutor of Kommersant.

The former head of the Department of fire tactics at the Academy of state fire service of EMERCOM Alexander Podruchny told “Kommersant” that the last five years in the system EMERCOM almost never given a new title. Was banned around posts and from region to region. “We have the national ensign at half the fire guard and the guard commander is the officer’s position, which to a captain can be promoted. Beams all by himself brought up the rear. Now the rank of Lieutenant Colonel will be assigned in the field. In addition, the Ministry has already issued a call that those who were fired in recent years, unable to return to service,” said Mr. Podruchny.

As earlier wrote “Kommersant”, the last few years, the MOE optimization was performed. In fact, this meant a reduction of employees in 2015 was fired 59,8 thousand people. For vacant posts none were received, and those who have turned 45 years, was fired. Mr Chupriyan ordered in the shortest possible time to submit proposals for the acquisition of the units of the emergency Ministry of Russia “with the current shortage”. At the meeting, he noted that he had reviewed the situation on the pool of staff and shortage, stressing that “shocked by the number of vacancies and shortage of staff”.

Another important innovation concerns fuel economy. The new leadership of the Ministry of emergency situations ordered to audit the spending of petroleum products since 2013. Alexander Chupriyan noted that the practice of savings, beginning in 2015, will be finished.

Previously, firefighters told “Kommersant” that because of the economy in parts has ceased to engage in practical exercises on objects. The lack of practice hindered the work units in emergency situations. As it turned out after a fire in the Kemerovo shopping centre, “Winter cherry”, most of the firefighters involved in extinguishing the Mall, saw the object on paper. According to the Kommersant source, knowledgeable about the content of the conference call, Alexander Chupriyan said that the savings of fuel violates the training and learning processes and leads to professional degradation, and called to end it. “In fact, Chupriyan has announced that with the optimization done”, — said “Kommersant” the results of the meeting, the chief of the guard of one of Moscow’s fire brigades.

Alexander Podruchny called the decision of Mr. Chupriyan “very correct and timely,” but admits that “five years are still going to get out of the current situation.”