The command verifies that two versions of the attack on the battery. 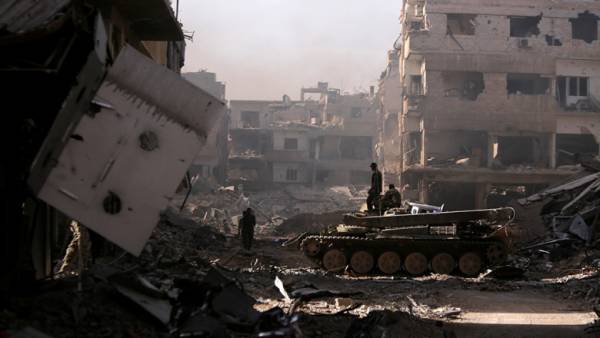 On Sunday, the defense Ministry reported the death of four and injury of three soldiers who were carrying out a fighting task in the artillery battery of the Syrian government troops in the province of Deir ez-Zor. In the attack suspected militants of the “Islamic state”, but, as it became known “Kommersant”, the Russian military check another version. Two days before the attack in the district of Deir-ez-Zor from the base of the international coalition of al-TANF was thrown over the men, claiming to be “moderate opposition”, which could participate in the attack.

About the wounding and death of Russian military in Syria became known on the morning of may 27. In the press release of the defense Ministry reported that an artillery battery of the Syrian government troops was attacked at night by several mobile groups of fighters. Two Russian military adviser, was driving the fire died on the spot, another five Russian soldiers were wounded. The latter was promptly taken to a military hospital in Moscow, but managed to save not all: two, despite the efforts of doctors, died. Chain of command the military personnel presented to the state awards, said the defense Ministry.

According to a source “” in military control bodies, the battle in the village Mayadin (province of Deir ez-Zor) occurred in the middle of last week. A few days before in the province arrived a group of about ten Russian servicemen, who were to coordinate the actions of the Syrian military: for example, to have the tip targets for destruction. Contractors 200th artillery brigade of the Eastern military district (Zabaykalsky Krai, Mountain village) already had experience of travel in Syria and know how to deal not only with the old artillery systems, and rocket systems of volley fire type “Tornado” or “Hurricane”, howitzer and attitudes such as “Msta-B”.

After training of the Syrian military they had to go to the base Hamim (Latakia) to get a new job and then go home. But the evening of may 23, the Syrian crews of an artillery battery was discontinued, and the personnel with the exception of soldiers, left to guard the perimeter, went to rest.

The attack was swift and well prepared, says military source””: the Syrian military did not immediately understand what was happening, and often does, chose to get out of the fire, which was conducted by militants from a dozen jeeps mounted with heavy weapons. Depending on the situation, the Russian military took command, in a short time launched artillery and returned fire. The battle lasted about an hour, he was killed 43 militants and six cars. The defending side suffered losses: according to the information portal “Chita.ru”, 32-year-old senior Lieutenant Sergey Elin and 23-year-old Sergeant Igor Mikhailov died on the spot. Note that around this time in Syria were killed and another soldier — 25-year-old Kirill Polishchuk, who served in the Baltic fleet. According to “Russian service BBC”, he served in the army electronic warfare and was killed in the militant attack. His father to communicate with “b” refused. “B” was sent to the defense Ministry with the request to clarify the number of military advisers who participated in the battle of Deir-er-Zor, and also to disclose the names of the victims.

According to “Kommersant”, the Russian military is suspected of involvement in the attack an artillery battery of the “Islamic state” (banned in Russia). However, this is not the only version:

according to one of Kommersant’s sources, two days before the attack in the district of Deir ezzor under the pretext of helping the Kurdish forces with the al-TANF in HOMS province were transferred so-called fighters of the Free Syrian army, which Russia considers to be accomplices of the militants.

He argues that verified information about the involvement of militants, who were trained at this facility, to the shelling of the Syrian batteries. FL-TANF, a military base of the international coalition, which was established in 2014 by the US secret services and, according to various sources, actively used by the coalition for the military training of the “moderate opposition”. The Russian military, in turn, stated bluntly that at this facility are training Islamic radicals, the purpose of which is to fight the army of Bashar al-Assad, not Islamic state.

Now officially recognized the loss of the Russian army “Syrian campaign” is 91. More than half of them had the last five months (since the announcement of the reduction group). The biggest losses Russia has suffered March 6: then, as reported by “Kommersant”, the crew of the crashed military transport plane An-26. All 39 people on Board were killed.