Conservative Ireland voted for the legalization of abortion

LONDON, may 26 — RIA Novosti, Natalia Kopylova. The people of Ireland voted for the introduction of the abortion law amendment, which will repeal the ban on abortion, according to the official results of the referendum. 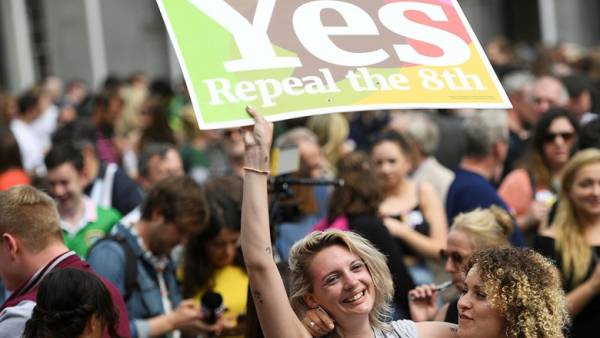 The vote on this issue is historically significant for Catholic Ireland, where the attitude to abortion is traditionally conservative.

The results showed that 66.4 per cent of voters were in favor of legalization and 33.4% against.

After the results of the vote on Saturday evening, many residents, mostly women, took to streets and squares to celebrate this event.

Citizens were asked to answer the question of whether they want to repeal the eighth amendment to the Irish Constitution banning abortion and to make Parliament responsible for the drafting of legislation in the field of abortion. Now the Irish will have the right to terminate a pregnancy up to 12 weeks to 24 weeks to have an abortion those women for whom birth means a threat to life or health.

The eighth amendment was adopted in a referendum in 1983, she notes the equivalence of the lives of the mother and fetus, and prohibits abortion in almost all circumstances. The Catholic Church opposes the repeal of the amendment, stating that the legalization of abortion is a direct path to the resolution of euthanasia. Opponents of abortion also fear that changing the Constitution could lead to the disappearance of people with down syndrome — as in Iceland, where abortions are almost in 100% cases of the syndrome in embryos.