Volodin: if complaints Slutsky confirmed, the conversation will be “other”

St. PETERSBURG, may 25 — RIA Novosti. Speaker of the state Duma Vyacheslav Volodin has promised that in case of providing evidence of allegations of harassment of the Deputy Leonid Slutsky journalists to talk to him “in another way”. 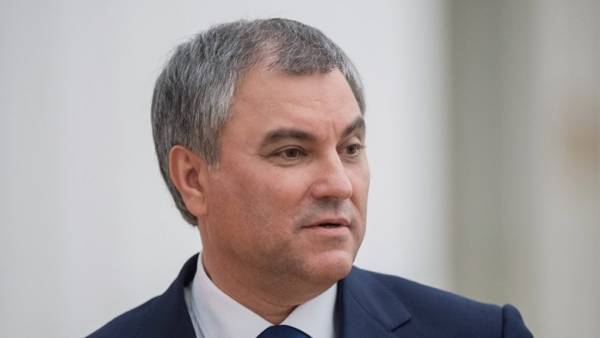 “Photos never seen, the audio was not presented, only the interpretation of it. Charges are based only on the statements. Confirmation of applications if will be, then we have to talk in a different way. While the state Duma Commission has not found grounds to convict him due to lack of evidence”, — said Volodin reporters on the sidelines of SPIEF.

The head of the Duma international Committee Slutsky has previously accused of molesting producer of the TV company “Dozhd” Darya Zhuk and correspondent of Russian service bi-Bi-si Farid Rustamov. The girls made complaints to the Duma Commission on parliamentary ethics. Publicly against Slutsk and made the Deputy chief editor of the TV channel RTVI Ekaterina Kotrikadze, however, a complaint to the Duma Commission, the journalist has not sent. Slutsky called the accusations “slander” and noted that attempts to make it a “Russian Harvey Weinstein” like a cheap and shoddy provocation and are doomed to failure.