“Let him choke!”. What billionaires say about sanctions

You just need to understand that the sanctions imposed forever, and forget about them, said Gennady Timchenko. Other participants of the Forbes list, is even more categorical in his judgments. 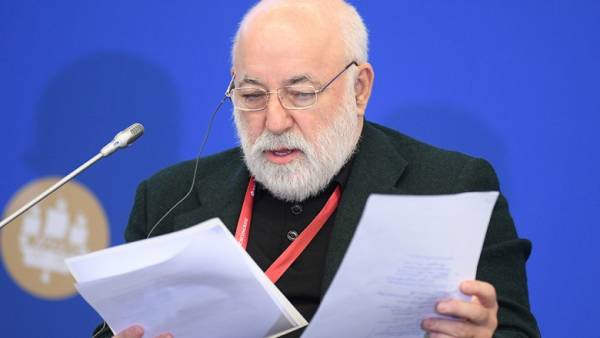 Sanctions against businesses was a theme at the St. Petersburg international economic forum (SPIEF). Forbes gathered the opinions of billionaires, about how one should respond to them.

At noon in front of the entrance at the Russian-French session of the SPIEF-2018 gathered a crowd. While hall was examined by the security service, in front of the doors, languished the oligarchs on the Forbes list. Sandwiched ordinary participants of the forum from foot to foot shifting, Leonid Mikhelson, Gennady Timchenko, Andrei Guriev and Andrei Bokarev. At a little distance surrounded by the retinue of missed Viktor Vekselberg. Half an hour later the doors opened and the crowd flowed into the room, filling it with the hum.

“I will try to only use the diplomatic expression”, — said the head of RSPP Alexander Shokhin and the microphone and demanded silence. He also revealed the reason for the hype: the session was supposed to look Vladimir Putin and President of France Emmanuel macron. After nearly an hour Shokhin interrupted the speech of the Governor of Kaluga region Anatoly Artamonov: “the Presidents are in the hallway.” When they really went into the hall, Shokhin immediately assured that during the session no one has ever mentioned the word “sanctions”. However, at the forum businessmen have repeatedly complained about economic restrictions.

The voice of business

Vladimir Putin and other senior Russian officials, was absent at the Russian-American session. Ignored meeting and the American Ambassador, although a week ago was going to attend the panel discussion. The participants of the forum have linked his absence with the fact that one of the speakers was Viktor Vekselberg, placed under American sanctions.

“Little we have left — we let our pain” — quoted Vekselberg song of Bulat Okudzhava. A day earlier, Vekselberg said that the business lost policy “leadership role for addressing key challenges that exist in the world.” The dominant business “don’t have anywhere to go,” insisted the tycoon.

To ensure that the voice of business was “stronger”, called on the panel “Russia-Germany” the billionaire Alexey Mordashov, whose “Power machines” are under U.S. sanctions.

“Our voice is a call to politicians to find a common language and created the conditions for the normal development of the business,” explained Forbes billionaire Dmitry Pumpyansky. American division of his “Pipe metallurgical company” made in the USA every fourth LNG pipe. The policy of protectionism is very dangerous, assured Pumpyansky correspondent for Forbes: “We were in our youth.”

Protectionism, restrictions to trade and capital flows are increasing, said first Deputy Prime Minister Anton Siluanov on the first day of the forum at the session “Time ago”. And concluded that: “the cold war” saved, “in other areas.” Billionaire Anatoly Karachinsky compared the situation with a pendulum, which is now “probably the most unpleasant point” of its trajectory.