Movie Mogul Harvey Weinstein surrendered to the police. He was first indicted

Hollywood film producer Harvey Weinstein, of which more than 50 women accused of sexual harassment, surrendered to the police in new York. Weinstein will be the first indicted on two counts of rape, us media reported. 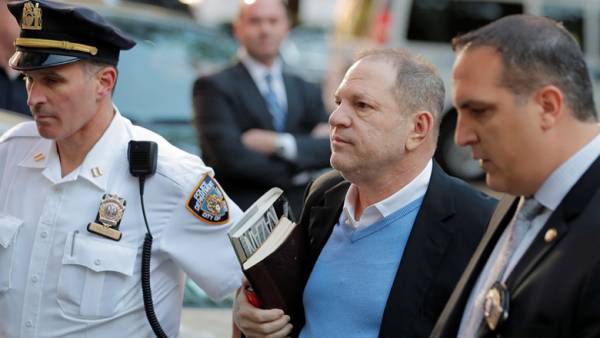 If Weinstein is not surrendered to the police, he would have probably arrested on the eve of the Grand jury, which is investigating, announced that the producer will be charged.

Weinstein appeared at the police station at 7:25 am with a stack of books and other things, informs Reuters. He was escorted inside the front of many journalists.

Harvey Weinstein turns himself in to the NYPD pic.twitter.com/Mg91eD7yhX

After a few hours, as expected, Weinstein forwarded to the court of Manhattan where the judge will charge him and released on bail.

The first official accusations against Weinstein is only an intermediate result of the investigation, sources say the New York Times. Also involved in the investigation the Prosecutor’s office in Manhattan.

Sources reported the New York Times that Weinstein had agreed on bail of one million dollars and his own recognizance. Before trial, Weinstein will have to wear an electronic monitoring anklet.