“Zaya, I killed ment”. What happened to “heroes” sensational crimes?

These stories were in all the news. All of their “heroes” were on the dock, a spent received time. What happened to their life, to understand “AIF”. 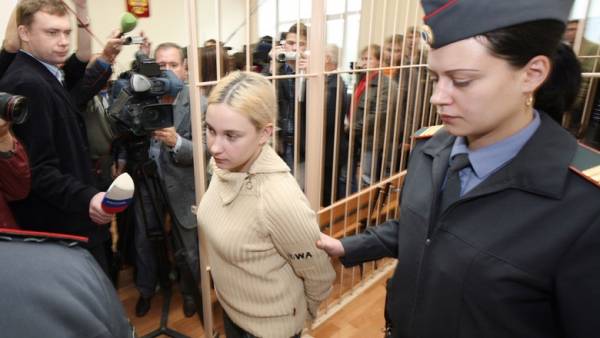 In 2011 Anastasia Cherepanova, working as a cashier of “Mail of Russia” stole 7.5 million rubles, intended for the payment of pensions, and went along with her lover, a taxi driver by Igor Matyukova. They managed to buy expensive clothes, a new Hammer, a vacation home… But they got caught. Anastasia received 4 years, Igor — 5. Both served and was released. The love is gone. Cherepanov said that the Swearing ruined her life that “provoked crime.” He replied that he was the victim, and her daughter is somewhere hid 1.2 million, which did not have time to spend.

In Novosibirsk, 22-summer Olga Melnichenko, in a drunken stupor brought down to death in may 2009, the traffic police inspector, after with a smile waved to the camera. SMS Olga and her friend:

“Zaya, I killed the COP, forgive what to do?” — “Arrange a hysterics, don’t say anything and don’t sign,” blew up the Internet.

Melnichenko did everything ordered by the court to 4.5 years in a colony-settlement and in late 2013 released. Although colleagues of the deceased inspector Dmitry Chulkov said that “the court will certainly show humanity,” because “her parents are judge and employee of SC”. Olga was married — though not for “Know”. Lives in Novosibirsk, works as an accountant in a transport company. Judging by her photo in social networks, travels a lot. After his release, she was forbidden another 3 years to sit behind the wheel, but now in her purse again have a driver’s license.

Everyone was amazed by the accident involving the daughter of the Chairman of Irkutsk regional election Committee Anna Shavenkova. In 2009 she knocked on the sidewalk two sisters, one of whom died and the other became disabled. The case gained wide publicity, because the Internet has got the video: it shows Shavenkova immediately after the accident, not even approached the victims and began to inspect your car and talk on the phone.