General Ogloblin was in counterintelligence

In the case of “Voentelekoma” arrested defense Ministry official. 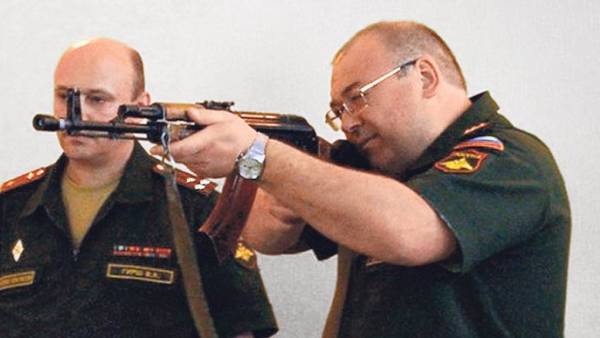 As it became known “Kommersant”, the list of the accused and arrested on loud criminal case about the theft of almost half a billion rubles in the execution of prisoners between the defense Ministry and JSC “Voentelekom” state contracts for the modernization of military communication systems added a new helper. He became a major-General Alexander Ogloblin, who until recently headed the 1st Chief of the communications office (GUS) the military Department. According to investigators, the military, acting as customer equipment, it could be in proportion with his alleged accomplices. They, by the way, and gave his testimony.

Alexander Ogloblin was detained by officers of the military counterintelligence and arrested 235th garrison military court at the request of the Chief military investigation Department of the Investigative Committee of Russia, which accuses the General of a large fraud (part 4 of article 159 of the criminal code). With this decision, the senior Communicator and his lawyers disagreed, filing an appeal with the Moscow district military court, but there is recognized elected a measure of restraint is justified. “Military investigators have provided the court with convincing evidence linking the accused to the crime Ogloblina,” — said the source “b”.

Mr. Ogloblin alleged theft was committed in 2013 with the implementation of large-scale government program for the modernization of the army’s classified and special communications. It supposed to translate military communications from analog to digital: to replace obsolete equipment and to develop the appropriate software.

The General contractor for design and installation work was chosen under the control of the Ministry of defence JSC “Voentelekom” and the customer representative from the military Department acted at that time Deputy chief of the 1st Department of the GUS Ogloblin.

The officer had a long-standing friendly relations with the managers “Voentelekoma”, so partners, as believes a consequence, quickly found a common language. As a result, for example, three times the size of the deliveries were paid for by the Chinese routers, which traders only stick labels, thus turning the apparatus in the “products of the Russian manufacture”.

Then, the Ministry of defense paid for the so-called supervision of vendors for installation of routers for confidential communication. In General, for the implementation of the state program on digitization of the military when he the General contractor of “Voentelekom”, as the investigation revealed, received about 10 million rubles, While this is 25 times large sum went to pay for services to many close to the heads of JSC intermediaries.

Only the group of alleged plunderers of the consequence incriminates the theft of 460 million roubles, however from the database of the arbitration courts, it follows that in fact the military has lost 1,271 bln rubles in any case, the same amount it expects to collect through arbitration with “Voentelekoma”.

Recall that in the framework of the criminal case about the theft of sitting under arrest two former Director of “Voentelekoma” — the General Director Alexander Davydov and his Deputy Oleg Savitsky. Both were arrested on similar charges in December last year. Remains in detention and the General Director of firm-the supplier of routers, OOO “Arsey” Tatiana Ilyina. In the first phase of a military investigation showed the lady leniency, asking the court to keep her under house arrest, but after Ms. ilina has violated the stipulated conditions for daily walks, the result brought her back in jail. But, on the contrary, from custody was placed under house arrest another accused, former Advisor to the General Director “Voentelekoma” Dmitry Semiletov, who signed pre-trial cooperation agreement, in which he clarified the result of the whole scheme committed the theft and spoke about the role of each of his accomplices. Kommersant’s sources believe that the testimony of Mr. Semiletov allowed the investigator to press charges General Ogloblin. Protection of a repentant defendant in the case, however, argues that the referent with the General never directly communicated, the testimony against him was given and between them had not even carried out a confrontation. “Source of information”, according to representatives of Dmitry Semiletova, you should look for among those accused of higher rank who are ready to deal with the investigation.

53-year-old General Ogloblin, having served as an engineer-secretscom communications hub of the General staff, graduated head of the Department, which is entrusted with such important tasks as “planning the construction of a communication system of the armed forces, the organization and management of communications systems and information-telecommunication component of the control system of the armed forces”. He was awarded the order of Honour and order “For military merit”, and last year, by presidential decree, became a major-General.