Business representatives discussed with the deputies at the meeting of the Council on lawmaking in the state Duma speaker Vyacheslav Volodin suggestions for revision for the second reading of the bill on punishment for the execution of anti-Russian kontrsanktsy. Last week, members decided not to approve the amendments to the criminal code without further consultation with the business. In the meeting on Wednesday was attended by the heads of the Association of retail companies (ACORT), European business (AEB), commercial-industrial and Public chambers, “Business Russia”, representatives of Sberbank and VTB, “X5 Retail group”, PMC. 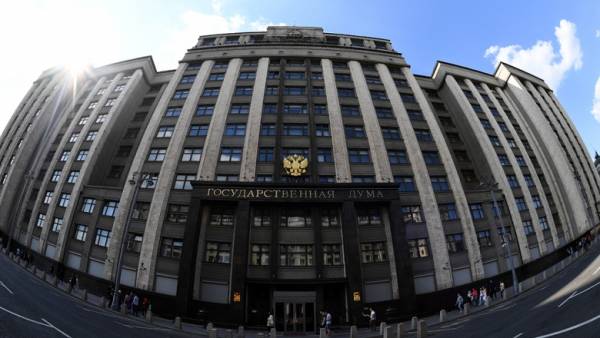 “You have the opportunity to make amendments before the second reading, to discuss the proposals with the relevant committees — called representatives of the business community Volodin. On Tuesday, the Duma approved the organic law on counter-sanctions that had reduced compared to the original version, making it more of a framework. Volodin proposed to meet again after the discussion of the amendments to the criminal code with the government: “There is a proposal to meet to discuss the final version which we will submit for consideration in the second reading. The time we have, on the one hand is, on the other hand, I would like to have held the consultations, not fish or cut bait”.

The topic of sanctions and counter-sanctions for the deputies of the “new”, the speaker explained: “I stress once More that the issue is new to us, the approaches in this area are in the European Union and the United States of America, they certainly can serve as an example for us, and we can see their decisions in this field. But we must admit that there are very strict measures, it is hardly necessary”. Volodin also suggested that the government’s budget would include measures to support businesses that fall under the sanctions.

Rector of the Higher school of economy Yaroslav Kuzminov after the meeting said that the project is going to complement administrative responsibility: a fine of officials may be 100 000 rubles, and for legal entities it is not provided.

Thus, the deputies will have to split the bill into two parts: amendments to the criminal and administrative codes must be considered separately. Kuzminov also said that the experts proposed the deletion of the administrative responsibility of the actions of the Russian companies and companies operating in the territory of Russia, perform in an environment where they just make deals with foreign companies and when the point about the sanctions is the standard. An administrative penalty must not be applied to companies that have no other choice but to comply with the sanctions, I’m sure ‘ as otherwise they or the state will suffer serious damage.

The experts do not object to the fact that under the criminal liability can be made public calls for new sanctions, to exacerbate the existing sanctions.

The President of the Russian Union of Industrialists and entrepreneurs (RSPP) Alexander Shokhin on the Board suggested that any punishment was introduced after the conclusion of the Federal body of Executive power responsible for regulation of the industry within which the contract traded. The government or relevant departments can identify a closed list of cases in which can be applied the law, explained Shokhin.

“Russian businesses chorus supports the most strict criminal liability for public incitement, aiding and abetting the introduction of new sanctions,” wrote in Facebook by political analyst Alexander Fire who participated in the meeting: “And some business representatives (not members!) I propose to interpret the deliberate transfer of such information on the new sanctions list even as treason”. It is also significant that the business acknowledged the correctness of the state Duma, took the initiative to sharpen the question on the introduction of a legislative response to the sanctions war, says the expert: “As expressed in the RSPP, the sanctions for 4 years, and the time when we had to start to push at the system level, we even missed”.