Business is ready to suffer, but only the administrative

The Board of legislators will discuss a bill on the punishment of “execution of anti-Russian sanctions” again. 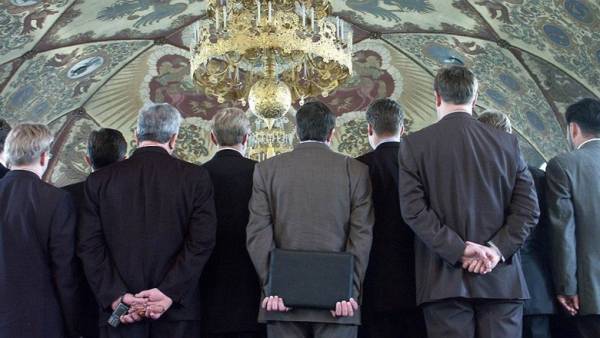 The expert Council of lawmakers at the state Duma discussed amendments to the penal code introducing responsibility for “enforcement of the anti-Russian sanctions”. Representatives of the business community suggested deputies to soften the bill, replacing criminal penalties with administrative, as well as to specify the wording of the law. Experts and parliamentarians decided to send the document back for revision, until the second reading, he will once again go through the Board of legislators.

“Disagreement” business calls the first paragraph of the amendment, which criminalizes the enforcement of foreign sanctions on Russia. This means that entrepreneurs can be punished, for example, for refusing to work in Crimea from-for fears to get under sanctions of the West. The bill was already passed by the state Duma in the first reading, but after the negative opinion of the business community the speaker of the house and one of the authors of the bill Vyacheslav Volodin called for expert hearings.

The head of “OPORA Russia” Alexander Kalinin, the head of RSPP Alexander Shokhin and representatives of the chamber of Commerce and Ranepa have preferred to be responsible for the enforcement of foreign sanctions on Russian territory was transferred from the Criminal code to the Code of administrative offences. First Deputy head of the faction “United Russia” Andrei Isayev said that the business proposal was to mitigate the rule in relation to persons who acted under force majeure.

As reported by “Kommersant FM” Deputy Executive Director of “OPORA Russia” Ivan efremenkov, business offers to consider in order to introduce administrative liability, since it would be difficult to prove the object of the crime.

First Vice-speaker of the state Duma Ivan Melnikov at the meeting of the Council on legislation acknowledged that the wording of the law require greater certainty. Following the meeting, any decisions and recommendations had been adopted, the Board of legislators will meet again in the second half of June, to flesh out the provisions of the document. The scope of punishment for “execution of penalties” can be reduced in comparison with the first reading, said the rector of the Higher school of Economics Yaroslav Kuzminov on the results of the last meeting of the Council.

The participants of the discussion supported the second paragraph of the amendment it provides for the punishment for the Commission of a Russian Federation citizen of a deliberate action, contributing to the imposition of sanctions by a foreign state.

“Concerning the question of incitement to the introduction of sanctions against Russia, all believe that it should remain in the Criminal code, but note that the language also require sharpening,” — said Ivan Melnikov.

Alexander Shokhin has specified that criminal responsibility can be summed up public calls for the establishment of anti-Russian sanctions. Andrei Isayev also said that the Council discussed the opportunity to equate aiding the introduction of sanctions against Russia for treason.

Meanwhile, the Association of entrepreneurs for development “business patriotism,” “Avanti” proposed to limit themselves to officials and deputies, the law limiting their visits to countries that have imposed against Russia sanctions. According to the authors of the appeal, representatives of the Russian government “unfriendly” countries can become “recruitment”, and their children abroad are “the most effective lever of pressure on their parents.” “Avanti” offers for ignoring such standards to introduce administrative penalties up to dismissal (Association “Avanti” is controlled by companies associated with businessman and former Senator from the Chechen Republic Umar Dzhabrailov).