The war preparing for the world championship

The situation in the Donbass deteriorated sharply. OSCE observers fix the increased level of violence: 7.7 thousand violations of the ceasefire over the past week. The conflicting parties daily report casualties due to shelling and sabotage. Kiev authorities and self-proclaimed republics accused of escalating each other. In DND it is associated with the approaching world Cup. The situation is dangerous, if they don’t stop, it can develop into something more, says the interlocutor of Kommersant in the Ministry of foreign Affairs of the Russian Federation. 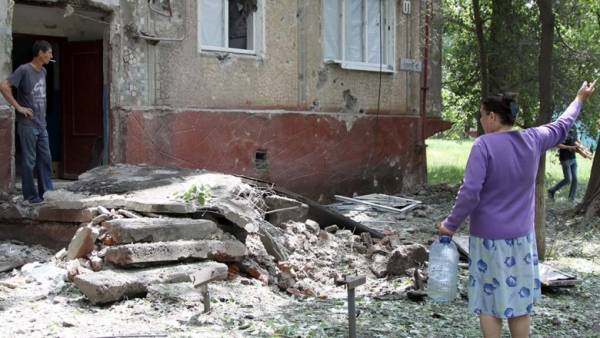 In the Donbass frequent clashes between the Ukrainian military and security forces of the breakaway DNI and LC. Reported sabotage, mortar and artillery shelling.

“The recent surge of militant activity in the line of contact in Eastern Ukraine to provoke more death and destruction — said in a statement on Tuesday the statement of the special representative of the OSCE Chairman in the Contact group on conflict settlement in Eastern Ukraine, Martin Sajdik.— I urge the parties to immediately cease hostilities in accordance with their earlier public commitments and to do everything possible to protect civilian populations, ensure the repair and smooth operation of civil infrastructure, and to promote the important work of the Special monitoring mission (SMM)”.

A day earlier, may 21, first Deputy head of the OSCE SMM Alexander hug cited statistics of violations of the cease-fire. “Last week was the worst this year, in terms of many indicators, said Mr. hug.— Overall, we recorded almost 7.7 thousand violations of the cease-fire. On some days the level of violence reminiscent of the stage of the conflict, which we thought was in the past”.

In the night from 20 to 21 may, the situation in the area of Gorlovka (Donetsk region) has escalated to the limit. In its escalation of the conflicting parties accuse each other.

“During the day the enemy, attacking from three directions, were trying to oust the Ukrainian warriors liberated Pivdenne (southern). In this sowed panic among the civilians of Gorlovka and was fired directly at Turecku”, — reported the press center of the Ukrainian operations of the joint forces. During the battle, killed two soldiers of the Ukrainian Armed forces and nine were wounded.

Command of the armed forces of the DNI said that the Ukrainian military are very close to their positions. “Our soldiers heroically fought, but the enemy team took three of them prisoner. One soldier executioners killed on the spot”, say in Donetsk.

That night in the neighboring Luhansk national Republic (LNR) hit a bridge on the highway between the Red Beam (renamed the Verkhovna Rada of Ukraine in the Crystal) and Lugansk.

The collapsed bridge blocked the railroad from the Russian border to Debaltsevo and Gorlovka.

Ukrainian military did not confirm any involvement in the sabotage, but comment on the incident with enthusiasm. “The destruction of the specified bridge makes it impossible and complicated the supply of ammunition and weapons divisions of Russian-terrorist forces,” — responded to the United forces of Ukraine.

The Ministry of state security of LPR are convinced that the bridge was blown up: “Found fragments of metal from an explosive device. The type and location indicate that a diversion made by the group with vocational training.”

Kommersant’s source close to the defense Ministry of Ukraine does not hide that the Ukrainian military is trying to improve their position.

“We do not violate the Minsk agreement, but the heights around Gorlovka (where the battles were fought.— “B”) is almost “gray zone”, from which we can fire. It’s not offensive, it is taking control of potentially dangerous points. Tank attacks we did not”, — said the interlocutor of Kommersant.

Military sources of the Ukrainian edition Strana.ua expressed in more detail: “If the heights around Gorlovka are under Mat, very Gorlovka separatists surrender without a fight. There is no sense there to die — all at a glance. Accordingly, Gorlovka is a strategic bridgehead for the offensive on Debaltsevo and Enakievo. Thus, cinches the noose around Donetsk”.

Through Debalcevo are roads and Railways Donetsk—Lugansk, making control of it vital for both of the breakaway republics.

However, the Deputy commander of the operational command of the DPR Eduard Basurin in a telephone conversation assured “Kommersant” that no advances of the Ukrainian army to commit is not allowed: “Ukrainians say they took the town South (near Gorlovka.— “B”), where they were before. This can be called a PR move.”

The deterioration in the Donbass, Eduard Basurin links with the upcoming world Cup, which begins in Russia on June 14. “If you look historically, against the background of major international competitions were military surges”, he said.

Acting foreign Minister LNR Vladislav Danego said “Kommersant” that the Lugansk expects to discuss the latest developments in the framework of the Contact group on the settlement of the conflict in the East of Ukraine in the videoconference. “A teleconference is scheduled for may 23. It is unclear whether we will be able to pursue the issues that concern us, in particular, the question of safe operation of infrastructure. I think I will get support from Russia, the OSCE and mediators and Ukraine will not be able to block discussion of these issues,” said Mr. Dane.

The interlocutor of “Kommersant”, the Russian foreign Ministry said that Russia is ready to participate in a video conference, and added: “We broadcast foreign partners signals the escalation of tension.”

“All talks with other leaders on these issues (deterioration of the situation in the East of Ukraine.— “B”) are placed. The topic of Ukraine will be the subject of negotiations at the forthcoming meeting of Vladimir Putin with Emmanuel Macron, in the framework of the OSCE will be tough to raise a question about the sharp aggravation”, — explained “Kommersant” in the Russian foreign Ministry. He added: “the Situation is dangerous and, if not immediately stop, can grow into something more. This is a real risk.”

Russia’s permanent representative to the OSCE Alexander Lukashevich assured “Kommersant” that the latest events in the Donbas will definitely discuss may 31, at the regular meeting of the permanent Council of the organization. In the escalation of the conflict, he accuses Kiev, which “blocks the initiatives of the contact group refuses to engage in direct dialogue with Donetsk and Lugansk, sabotages proposals of the OSCE.”

“Events around Gorlovka, which draws attention of the OSCE SMM, is another eloquent sign that the policy of escalation and armed provocations continues. For the termination of victims among civilians should withdraw heavy weapons from the contact line, to dissolve the forces and means, as foreseen by the decision of the contact group, to clear roads and to refuse the setting of new mines, as proposed by Alexander hug,” said Mr. Lukashevich.