Scientists have estimated the mass of all living things, including plants and people

According to the new estimates, the mass of plants is 80% of the mass of all living things, and the bulk of humanity is three orders of magnitude less than the mass of mushrooms. 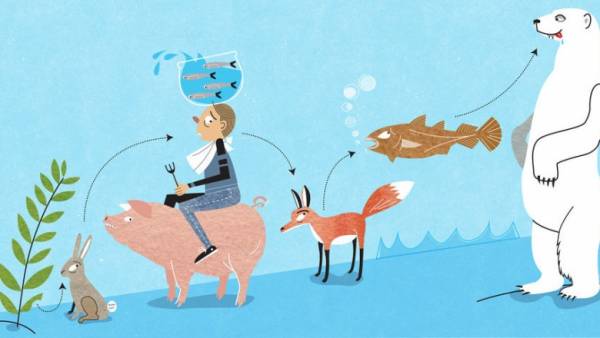 According to the new assessment. which lead to a paper published in PNAS, scientists from Israel and the United States, the carbon in the composition of living organisms weighs 55 gigatons (the scientists did not consider the many other elements included in the composition of living organisms; most of it is water weight, she decided to ignore). Of these 550 gigatons (million tons) 450 GT is the carbon of plants; 80% of the total biomass in terms of carbon. Another 70 GT of carbon (just under 13%) included in the cells of bacteria, 12 PT (2%) — fungi.

All of the animal Kingdom together — is some 2 gigatons of carbon, of which half are insects, arachnids and crustaceans.

The carbon that is part of the molecules that make up we, the people, weighs 0,06 GT and is more than mass of carbon of the bodies of all other wild mammals.

Man is composed of carbon by 18%, therefore, to find out the approximate mass of humanity, we need 60 000 000 tons of times 5 — get three hundred million tons. The mass of an average person by this calculation is 42 kg which is not too small, when you consider that we “weigh” not just the adults.

But the mass of creatures, obliged by its multiplicity of man, much greater than the mass of mankind: for example, domestic animals — cattle, pigs and others — outweigh all wild mammals; mass home more than 20 times. Same story with birds. A lot of plants we too much influenced over the last 10 thousand years, people have cut it in half.

All these figures, of course, interesting, but the scientists ‘ task was to estimate the mass of living beings, and to find the main source of protein on Earth. Yet they found him not; having difficulty with the estimation of the mass and composition of soil microorganisms. Ron Sweet, an ecologist from the Weizmann Institute of science in Israel and his colleagues hope to answer your question before the end of this year.