Ancient Europeans ritually fed to the animals who died in combat

Archaeologists from Denmark described a very unusual burial of the dead warriors of the first century of our era. Feature of the tomb was the fact that the remains of traces of post-mortem dismemberment and modification, and teeth of beasts. The authors believe that these data indicate rituals that existed among the ancient Scandinavians in relation to dead soldiers. A study published in the journal Proceedings of the National Academy of Sciences. 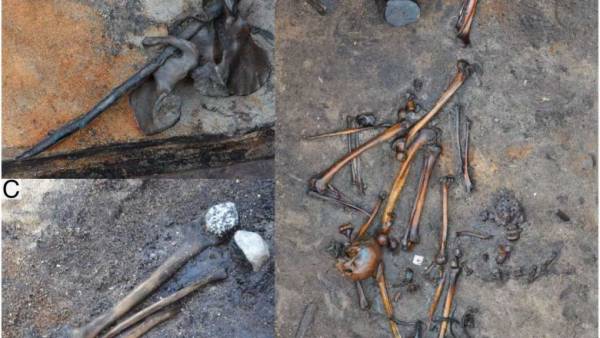 About the customs and military tactics of the tribes that inhabited Europe about 2000 years ago, we know mostly for the Roman written sources. However, these data do not allow us to fully understand not only the structure of society, but even to reliably assess the size of the Northern peoples at that time. In particular, in the Roman sources there is mention of the ritual attitude towards the burial of soldiers, but archeological findings of the battlefields of that time are extremely rare.

Between 2009 and 2014, the staff of the Aarhus University in Denmark, extracted 2095 bones and their fragments in the wetlands of Alken Enge. The remains were in the territory of 75 hectares is submerged in lake and peat sediments, belonged to at least 82 people, mostly young men. In the new work archaeologists led a detailed analysis of the marks on these remains, which suggests that the footprints were left with a ritual purpose. Based on the distribution of bones, the authors estimated the overall death toll to 380 people, which is much larger than the population of certain villages of that time. This may indicate that there was an army consisting of residents of different settlements.

Many of the bones archeologists have found traces of unhealed severe trauma that speaks specifically about death in battle. Radiocarbon analysis of the remains pointed at the same age of the remains. Also found were the remains of weapons, including swords, spears and shields. The bones were brought to this place after the battle, as indicated by cut marks and teeth of animals, as well as the location of some remains, for example, four pelvic bones, put on a stick. “The teeth marks of animals show that animals chews these bones from one year to six months, with the result that the remains had become a skeleton at least partially,” the authors write.