Military success was supported by the confidence of respondents in the VTsIOM status of the country. 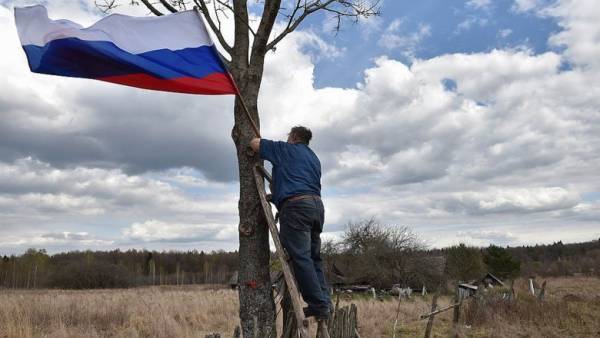 According to VTsIOM, almost half of Russians are confident that Russia is a “great power”, 35% believe that it will be soon. The key to its power “in the eyes of the rest of the world” interviewed by the sociologists call the army, “will power and the spirit of the people” and “good President”. However, 37% found it difficult to name the significant achievements of the country over the last 10-15 years. The expert believes that the high level is supported such sentiments and emotional feeling of “everyone is against us”.

“The turning point in the realization of the greatness happened recently”, said the head of the Department of research VTsIOM Stepan Lvov. “Strengthening Russia militarily and politically, played a role,” he says, but there’s another factor — “overcoming the crisis in the economy.” “The most negative scenario did not materialize. If the economy collapsed, neither of which made the dream of greatness of the country could not speak. This is not very much to say, and someone just does not want to recognize the merits of the government”, — explained “Kommersant” Mr. lions. Among the specific events 2016-2017 growth of confidence in Russia achieving great power status, the sociologist called the Syrian campaign.

11% of citizens believe that in the coming decades Russia “great power” will not (such 16% — in the group of 18-24-year-olds, 17% among respondents in Moscow and St. Petersburg, also said 17% of respondents with poor, according to their estimates, financial situation). In 2010, 16% found it difficult to assess the prospects of Russia as a “great power,” now these 5%.

On the question of what “makes Russia strong in the eyes of the rest of the world”, 26% said “capable and well-armed army”, 22% — “will power and the spirit of the people” and 17% “good strong President”. 5% remember the size of the country and the stock of its natural resources, and 1% — about the level of culture and scientific achievements of Russia, 4% said about economic development. 25% were undecided. The most significant achievements of Russia over the last 10-15 years, 18% said the development of the armed forces, 12% of the Crimea, 8% — the Olympics in Sochi. Undecided 37%, 5% special successes have not noticed.

Political analyst Boris Makarenko is sure that at the polls, the citizens are guided by emotion and not a deep understanding of Russia’s place in the world and “the sense of belonging to a great power” allows citizens to compensate for everyday and domestic troubles. “In the beginning of 2016 was the lowest point of the crisis sentiment, and in 2014, when it was annexed Crimea, a sense of victory, — the expert says. Now there is a rallying around the flag, but more the feeling that “everyone is against us, then we must mean something””.