The Cuban authorities confirmed the death of more than a hundred passengers and crew members of the Boeing 737-200 which was leased by the Cuban airline Cubana de Aviación Mexican company Global Air Mexico. On 18 may, the newspaper writes CubaDebate. 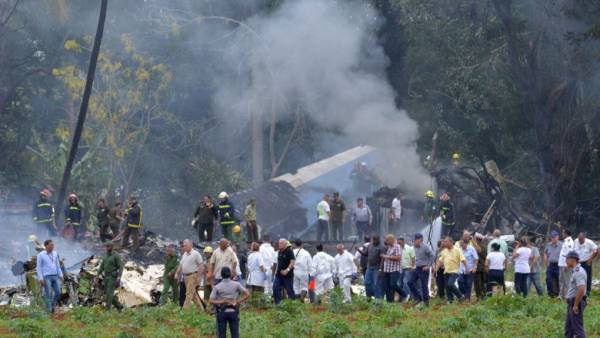 Crashed Boeing-737 was released in 1979. Manuel Rodriguez, the representative of the Global Air Mexico, the company that owns the plane told the newspaper CiberCuba that before the crash the plane had made a “bizarre twist”.

Thus in Global Air Mexico assured that “all documents of the airline meet the standards.” Technical condition of the aircraft complies with all the standards of civil aviation in Mexico and in Cuba.

The company conducts its own investigation of the disaster, because, according to Rodriguez, the incident seems “strange”.

The Cuban newspaper Granma quotes the words of eyewitnesses of the disaster. According to them, before it went down really sharply turned around. After that, told the newspaper eyewitnesses, the Boeing fell, hitting the electric wires. .

Witnesses managed to capture on video the moment of impact and explosion of the aircraft.

As reported by CubaDebate on Board the plane were 105 people, mostly Cubans. Thus far, five of the victims were foreigners who were on Board: crew members, members of the Mexican Global Air. Among victims — the commander of Jorge Luis Santos, the co-pilot Miguel Ramirez, and flight attendants Maria Daniela Rios, Abigail Garcia and Beatrice Lemon. .

Rescuers managed to bring to the hospital four survivors. One of them died. Now doctors are fighting for the lives of three other people. According to CubaDebate, all three — women, one of them from 18 to 25 years, another for about 30 years, the condition both is estimated as heavy. It became known the name of another survivor woman is a 39-year-old Emily Sanchez from Holguin. According to CubaDebate, Sanchez 30% body burns. .

Condolences to President of Cuba Miguel Diaz-Canela and all Cubans expressed by the king of Spain Philip VI, President of Nicaragua, Mexico, Venezuela, Russia and other countries.

The plane was flying from Havana to holguín, the popular resort on the East of the island. In a minute after takeoff “Boeing” fell in a field near the airport and Santiago de Las Vegas, 20 km from Havana and caught fire. The causes of the accident are being investigated. .