In Cuba, more than 100 people were killed in a plane crash

MEXICO city, may 19 — RIA Novosti. More than 100 people were killed in the crash of the Boeing 737-200 in Cuba that occurred on Friday shortly after take-off liner from the Havana airport. 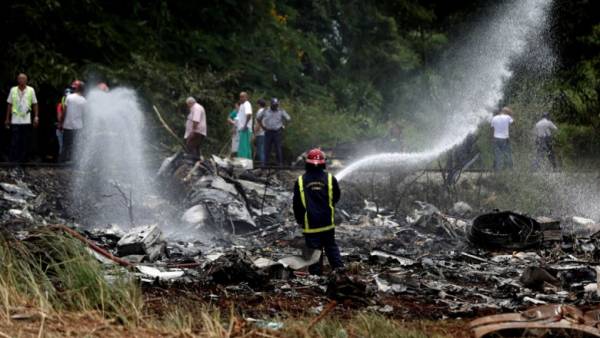 According to the Mexican company Global Air, which Cubana de Aviacion leased the aircraft on Board were 110 people, including 104 passengers and six crew members. Among the passengers of the crashed plane was five foreigners, the rest — the Cubans, the crew was from Mexico. Russian citizens were on Board, said the Russian Embassy in Cuba. Later it became known about the two dead Argentines.

Liner, carrying out flight Havana — holguín, crashed shortly after takeoff, crashing between the airport named after Jose Marti and a suburb of Havana, Santiago de Las Vegas, on the territory of agricultural crops.

Shortly after the crash, local media reported four survivors of a plane crash, three women and one man. Three surviving women were taken to the intensive care unit of a Havana hospital named after Calixto Garcia was in serious condition, the man died on the way to the hospital.

Later the TV channel, Cuba TV reported the death of one of the women, but then denied this information. Victims have multiple fractures, bruises and burns, they assist the Intensivists, surgeons, neurologists, orthopaedists and other specialists.

As reported by the Ministry of transport of Mexico, the aircraft was 39 years old, he was released in 1979, but had all the necessary work permits.

The Chairman of state Council and Council of Ministers of Cuba Miguel Diaz-Kanel ‘ stated that there will be an investigation of the circumstances of the crash and expressed condolences to the families of the victims. Black boxes not found yet.

Eyewitnesses told Cuban TV that the plane tried to return to airport after takeoff, but crashed into power lines. Witnesses also reported that the first rescuers arrived to the scene within 12 minutes after the fall.

Currently, all terminals of the Havana airport, Jose Marti continue to work.

The crash was the first for the company Cubana de Aviacion since 1999, follows from the data portal Aviation Safety Network (ASN) that tracks accidents.

Russian President Vladimir Putin sent a telegram of condolences to the Diaz-Canela, reported the press service of the Kremlin. “The Russian head of state conveyed words of sympathy and support to the families of the victims and wishes speedy recovery to those who managed to survive this catastrophe,” — the telegram says.

Also, condolences on the tragedy expressed Venezuela, Spain, Mexico, France. The Boeing company also expressed condolences to the families of passengers and crew members of the crashed plane in Cuba and willingness to provide the necessary technical assistance.

As reported by RIA Novosti in the press service of the Department of state, USA study the information about the plane crash Boeing-737 in Cuba and find out whether on Board American citizens. Canada stated that it is working on obtaining additional information and, if necessary, ready to provide consular assistance to canadian citizens.

The Cuban government declared mourning in connection with the crash.