Approved the composition of the new government of the Russian Federation

Moscow. May 18. INTERFAX.RU — Russian President Vladimir Putin has adopted all proposals on the personal composition of the new Cabinet, which he on Friday was presented by Prime Minister Dmitry Medvedev. 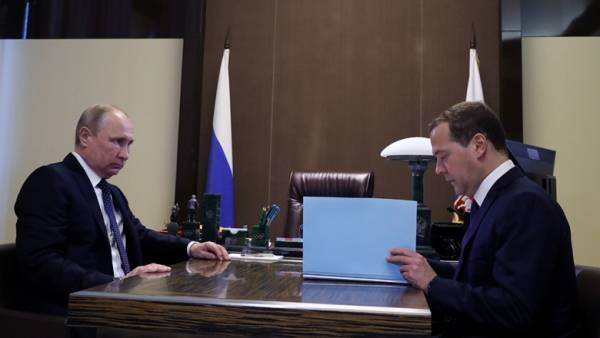 “I agree, will sign today a decree on the appointments. We tentatively discussed almost all of you submitted nominations. All people are famous, with good experience, well-established on the former site of the work”, — he said at the meeting with Medvedev.

Edition news Mail.Ru Vladimir Putin signed decrees appointing Vice Prime Ministers and Ministers of the new Government. About it at 15.00 I reported a press-service of the Kremlin.

So, the first Deputy Prime Minister Medvedev has proposed to appoint Anton Siluanov, who, in his opinion, should also be the Minister of Finance.

In the new government, the MOE headed by the Deputy head of the FSB Evgeny Senichev, who will succeed Vladimir Puchkov.

The social block of the government will not change. The head of the Ministry of health will reassign Veronika Skvortsova, Minister of labour Maxim Topilin, Minister of sport, Pavel Kolobkov.

The Ministry of construction and housing utilities of the Russian Federation headed by the Governor of the Tyumen region Vladimir Yakushev. Minister of natural resources and ecology of Russia Sergey Donskoy is going to be the Governor of the Yamalo-Nenets Autonomous district Dmitry Kobylkin.

Thus, the new government included former Minister of transport Maxim Sokolov, the last Chapter of the transformed Ministry of communications Nikolay Nikiforov, a former Minister of agriculture Alexander Tkachev. The Ministry of natural resources and environment leaves its former head Sergei Donskoy, the Minister of construction and housing and utilities Mikhail Men.

Mikhail Abyzov was the only one of the Ministers of the previous Cabinet left without a successor, the Commission on coordination of Open government, which he headed, in the new structure there.

In recognition of the Prime Minister, the structure of government, no fundamental changes because the current system “has proven its efficiency”. However, he noted at the last meeting, “there are a number of important proposals aimed at optimization of the existing system of Executive authorities”.

New structure of the government

According to the presidential decree, the new government will include 10 Deputy Prime Ministers instead of the previous nine. The position of the first Deputy Chairman of the government will be combined with the post of Minister of Finance of the Russian Federation.

Ministries that report directly to the Prime Minister, became one more, now there are 17. The change occurred due to the fact that the Russian Ministry of education reorganized into two ministries — education and science and higher education.

In addition, the Federal Agency for youth Affairs, formerly administered by the Ministry of education and science, will now report directly to government.

The structure of government has undergone several changes: the Ministry of communications was renamed the Ministry of digital development, abolished the state Commission on coordination of open government and Federal Agency scientific organizations.

One of the changes in the new structure of the government of the Russian Federation will be the transfer of missions from the Ministry of economic development Ministry of industry and trade.